A Follow up Study on False-Positive Preoperative HIV Test Results

HIV screening tests were performed for 31,041 individuals at the Kawasaki Medical School Hospital (Okayama, Japan) over three years, from April 2016 to March 2019. There were 13 cases out of 31,041 in which initial HIV screening produced a false-positive, and subsequent tests were carried out at least twice over the three years. When HIV screening was carried out using the same assay for three years, we investigated the length of time for which the results of testing of these 13 cases continued to produce false-positive results.

This study was conducted in accordance with the guidelines of the World Medical Association's International Code of Medical Ethics. Informed consent was obtained from all patients prior to participation. HIV screening tests were performed using fourth generation lateral flow immunochromatography Daina Screen HIV Combo assays (Daina Screen; Alere Medical Co. Ltd., Tokyo, Japan) to detect HIV-1/2 antibodies and HIV-1 p24 antigens simultaneously. Measurements were performed using the equivalence lot of the Daina Screen kit during the review period. For the plasma specimens that had been measured using an old lot, we remeasured some cryopreserved plasma specimens using the current lot, and analyzed the applicability of the resulting values [3]. 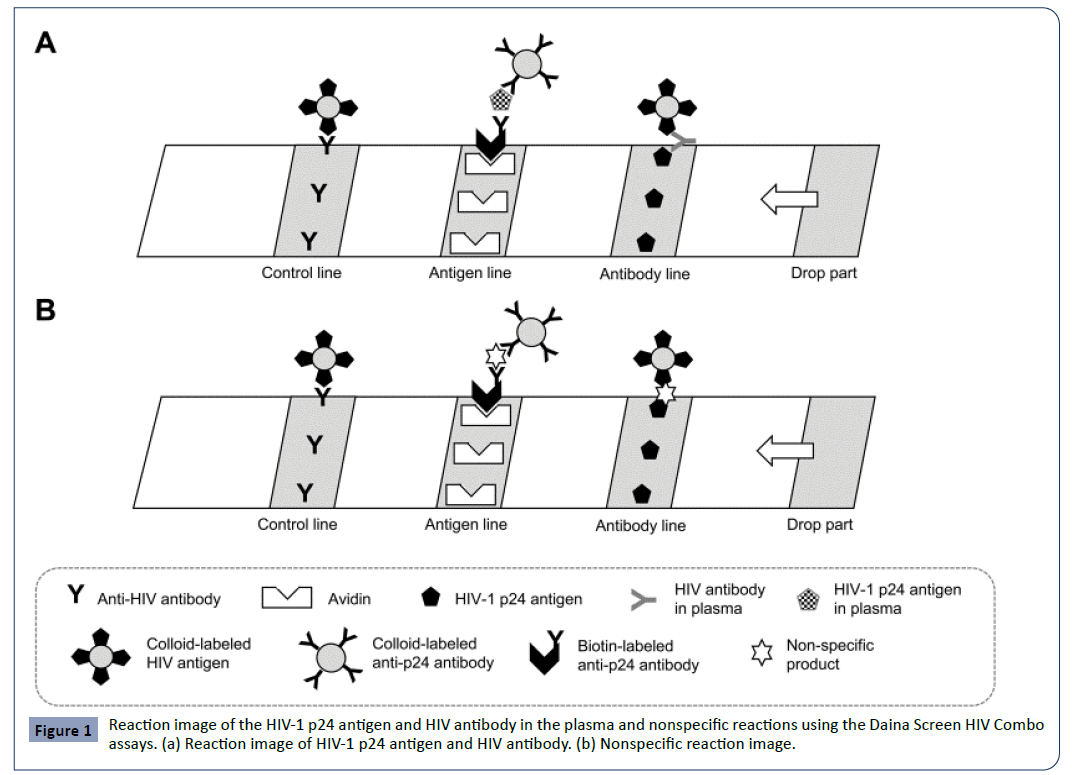 When an HIV screening test was positive, the quantity of HIV-1 RNA was assayed using a COBAS TaqMan 48 Analyzer (COBAS TaqMan; Roche Diagnostics, Tokyo, Japan) [4], and the HIVspecific antibody from the Western blot kits LAV Blot I and II (WB; Bio-Rad Laboratories, Inc., Hercules, USA) [5] was used as a confirmation test. The characteristics of the 13 patients who were re-screened for HIV using the same assay for three years following false-positive results at the time of the first examination are shown in Table 1. The publication of this study was approved by the clinical research ethics committees of Kawasaki Medical School Hospital. IRB approval number: 3500, IRB approval date: 2019.5.21.

Table 1 Distribution of 13 cases for whom HIV test re-examination was performed following false positive HIV test results at the time of the first medical examination.

The time from the first medical examination to the second assessment ranged from 89 to 519 days, with an average of 235 days. The age of the patients at the time of the first medical examination in these 13 cases was 12–89 years, with a median of 68 years, and the male to female sex ratio was 4:9. In these 13 cases, tests for the HBs antigen, the HBc antibody, the HCV antibody, and the syphilis serum reactions were negative, and false-positive reactions for the serologic markers of hepatitis and syphilis were not observed. Of the 13 cases, four produced falsepositive results for the p24 antigen and nine were false-positive for the HIV antibody. Of the 13 cases, eight (Cases 1–8) produced negative reactions on serial reexamination, and five (Cases 9–13) continued to present false-positive reactions.

False-positive reactions to the p24 antigen or the HIV antibody were observed in Cases 1–8 at the time of the first medical examination, but were negative upon reexamination.

The existence of false-positive results in immunoreaction has been reported in gynecological checkups [6], autoimmune diseases [7], preventive vaccination against infectious diseases [8], and lipid blood symptoms [9]. However, all these cases were discovered from isolated measurements. Therefore, even if HIV screening produces a false-positive result, these results are generally not followed up and investigated appropriately. It is difficult to analyze HIV false-positive results for every individual case, but it is important to understand the overall trend of screening results over time. The result of this study may lead to the production of recommendations for the follow-up of patients who generated a false-positive result.

In these 13 cases, therapeutic drugs such as painkillers were administered to the patients for the primary disease, and the HIV screening test was performed before the operation, following pretreatment. Therefore, the prescribed drugs and their metabolites may have affected the HIV screening test results. Fibrin microclots in the serum sample of the plasma specimens used for HIV screening tests, which might interfere with the assay, were removed [10].

We believe that “biotin-labeled anti-p24 antibody-nonspecific product (p24 antigen-like reaction material in a sample)-colloidlabeled anti-p24 antibody” or “colloid-labeled HIV antigennonspecific product (antibody-like reaction material in a sample)” may have been formed in the reaction process of the Daina Screen HIV Combo assay, and this might have resulted in falsepositive reactions (Figure 1b).

The HIV screening results of eight cases (Cases 1–8) were negative upon rescreening. We believe that a nonspecific product was formed because of the interaction between a therapeutic drug and the patients’ metabolisms, leading to transient false-positive reactions. These eight cases were reevaluated after an average of 298 days after the first false-positive result was obtained, and the nonspecific product formed might have disappeared within this time.

It was challenging to continue HIV screening using the same assay for three years for these 13 cases, in comparison with obtaining the result of the one-time false-positive reaction. We were able to confirm that eight of the 13 cases tested as true-negative results by the end of this long term follow-up survey. In addition, for five of the 13 cases, we were able to confirm that the false-positive reaction continued long term.

It is important to understand the dynamics of HIV screening test results. A positive result causes stress to patients, and increases the cost and workload of the hospital, which needs to conduct follow-up tests to confirm or refute the results of the original test. Ideally, there should be a very low level of false-positive results returned by post-operative screening of patients. Investigations such as that reported here can help to provide an understanding of the circumstances, such as the administration of prescription drugs, which may lead to false-positive results, and hence enhance the efficiency of patient treatment.

We are grateful to Alere Medical Co., Ltd., Tokyo, for their generous technical support.

This research did not receive any specific grant from funding agencies in the public, commercial, or not-for-profit sectors.