An Unusual Case of Huge Morgagni Hernia: The Need for High Index of Suspicion

Morgagni hernia is an uncommon form of congenital diaphragmatic hernia. They are mostly asymptomatic but may sometimes present with non-specific symptoms. The absence of typical clinical manifestation in cases of Morgagni hernia leads to delay in diagnosis and subsequent treatment. Delayed or Missed diagnosis can lead to considerable morbidity and even mortality. We present an unusual case of huge Morgagni hernia in apparently healthy-looking 4-month old male child with fast breathing and intermittent cough being investigated for bronchopneumonia unresponsive to antibiotic therapy. Plain radiograph of the chest picked up the pathology and was confirmed with ultrasound. A high index of suspicion is required when assessing a chest radiograph with intrathoracic cystic lesions especially in a patient with respiratory symptomatology and occasionally symptoms suggestive of gastrointestinal obstruction.

Morgagni hernia was first described by an Italian anatomist, Geovanni Battista Morgagni in 1761 [1,2]. Morgagni hernia is one of the congenital diaphragmatic hernias and is characterized by herniation through the anterior sternocostal hiatus commonly known as the foramen of Morgagni [2].

Hernia of Morgagni is an uncommon form of congenital diaphragmatic hernia accounting for 3%-5% of all cases [3]. About 90% of these hernias occur on the right side of the sternum, 8% on the left and 2% bilateral [4]. Morgani hernias are commonly seen in females and obese people [4]. These hernias are usually small and the most frequent contents are omentum and transverse colon while stomach, liver, caecum, terminal ileum and ascending colon rarely herniate.

They are mostly asymptomatic and incidentally found during an unrelated diagnostic investigation [5]. However non-specific symptoms such as cough, dyspnoea and gastrointestinal symptoms may occur. Morgagni hernia, unlike other types of congenital diaphragmatic hernia are not often diagnosed during the first year of life and infrequently associated with other forms of congenital anomalies.

In this study, we intend to highlight the clinical presentation and radiological diagnosis as well as emphasizing the need for high index of suspicion in children with cystic intra-thoracic masses on plain chest radiographs.

A 4-month old male child with tachypnoea from birth and intermittent cough of recent onset being managed for suspected bronchopneumonia unresponsive to antibiotic therapy was referred by the Paeditricians to the department of radiology for plain chest radiograph to confirm the provisional diagnosis.

The chest radiograph showed multiple irregular cystic thinwalled lesions in the right lower lung zone limited by the horizontal fissure and surrounding an eccentric opacity. A vertical lucent band in the right hypochondrium is seen traversing the ipsilateral hemidiaphram and merging with the aforementioned intrathoracic cystic lesion. Radiograph also revealed minimal pleural fluid collection in the ipsilateral costophrenic recess with a lamella component (Figure 1). Intrathoracic herniation of bowel loops was highly suspected on the chest radiograph, and then an ultrasound scan of the chest and abdomen with a 7MHz transducer was initiated to confirm the diagnosis. The bowel loops were non-obstructed with visible peristalsis and filled with fluid and particulate matter (Figure 2). This patient was again referred to us four months after the initial investigation without surgical intervention for another chest radiograph which reveals bowel loops with haustral markings within the chest (Figure 3). 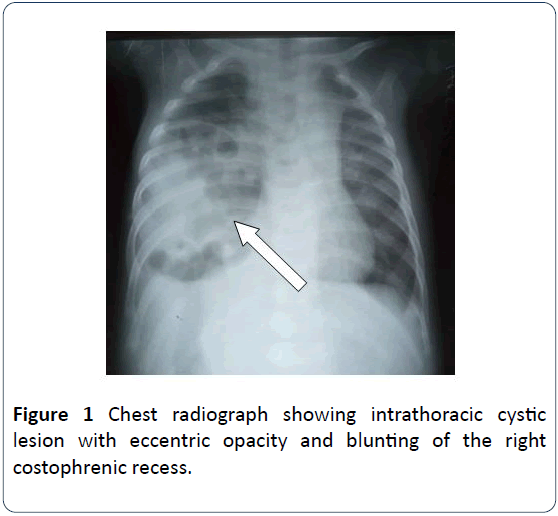 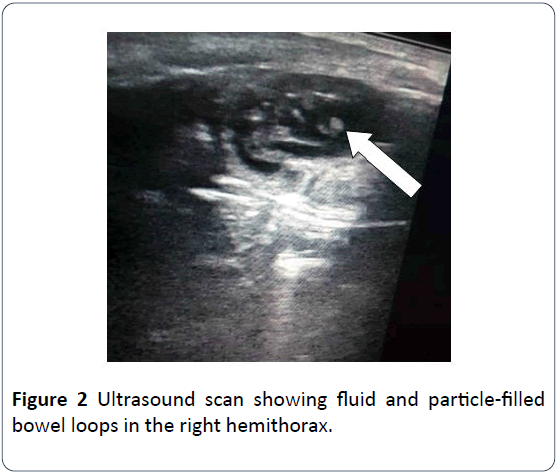 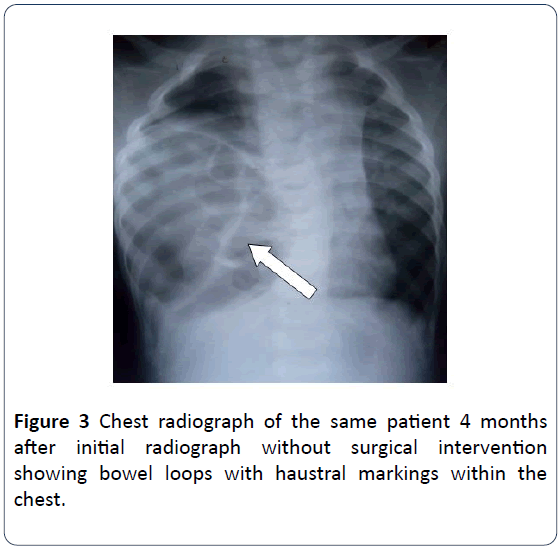 Figure 3: Chest radiograph of the same patient 4 months after initial radiograph without surgical intervention showing bowel loops with haustral markings within the chest.

Past medical history was not contributory. Fast breathing has been persistent since birth but parents did not pay attention to the child’s breathing pattern because it was considered normal for children. Child was apparently well until he developed intermittent cough which then warranted check up in the hospital.

Morgagni hernias are the rarest type of congenital diaphragmatic hernias and are due to herniation of abdominal contents into the thoracic cavity through triangular anterior diaphragmatic defect in the costochondral triangles [6]. Their origin lies in the septum transversum and failed fusion of sternal fibrotendinous elements of diaphragm; total or partial agenesis of the sternal or costal band with its altered insertion [6]. Rarely these spaces do not fully close and allow for the herniation of abdominal contents into the thorax. When this occurs, it is referred to as Morgagni hernia regardless of laterality [7,8]. Morgani Hernias are commonly on the right side of the sternum because left herniation is prevented by the heart and pericardium. They are usually small and closely related to the cardiophrenic angle. However, it can become quite large and present with symptoms related to obstruction, strangulation or incarceration [4]. Our case was that of an unusually large hernia in the right hemithorax that is more lateral than the cardiophrenic angle. However, there was no clinical or radiological evidence of obstruction noted.

Morgagni hernia are usually asymptomatic, when present, symptoms are nonspecific such as intermittent cough, fast breathing, chest pain, tightness, and fullness. In children the diagnosis is commonly incidental and usually seen during investigation for unrelated condition [5]. Our patient presented with respiratory symptomatology and was being investigated for chest related condition-Bronchopneumonia.

The absence of symptomatology and when present are nonspecific, could be responsible for late diagnosis of Morgagni hernia [5]. Unlike Bochdaleck hernia, the most common type of congenital diaphragmatic hernias which is usually diagnosed at birth, Morgagni hernia can be diagnosed during any period of life including prenatal period [9]. Their presentation in neonatal period and childhood is rare. This could be attributed to increased intra-abdominal pressure with age, causing stretching of the defect [9]. Our patient under review was 4 months old at the time of diagnosis.

Morgagni hernia is usually diagnosed on imaging modalities such as conventional chest radiography, Ultrasound (US), Computed Tomography (CT) or Magnetic Resonance Imaging (MRI) and the imaging features vary depending on the herniated contents that include omentum, colon or liver.

The imaging features of Morgagni hernia on plain radiograph of the chest may include ill-defined opacity at the cardiophrenic angle, air-fluid level at paracardiac location, or bowel loops in the chest. On the chest radiograph under review bowel loops were seen as thin-walled cystic lesions in the entire right lower lung zone limited by the minor fissure. A lucent band connecting the abdominal and thoracic cavities is evident. Minimal pleural fluid collection with lamella component was also seen in the ipsilateral costophrenic recess. This revelation raised the suspicion of bowel loops in the chest and prompted further investigation with ultrasound.

Ultrasonography or Computed Tomography (CT) can be used to confirm a suspected diaphragmatic hernia. Ultrasonography has been shown to be useful in evaluating diaphragmatic hernias but CT is the imaging modality of choice as it gives excellent anatomical detail on the contents of the hernia and its complications such as strangulation [10]. In the case under review, Ultrasound scan was done to confirm the diagnosis and it showed fluid and particle filled bowel loops with peristalsis within the chest. The use of ultrasound in the diagnosis of diaphragmatic hernias was also suggested by Coren et al. [11], that if congenital diaphragmatic hernia is suspected upon investigation, an ultrasound of the chest may also be useful. Although Minneci et al. [8] and Eren et al. [12] recommended CT scan for the diagnosis of Morgagni hernia, Vijay et al. [6] documented that CT scan for the confirmation of diagnosis of Morgagni heria was unnecessary and emphasized that plain chest radiograph is fairly accurate in suggesting the diagnosis of Morgagni–Larrey hernia. In our study, we used plain chest radiograph and ultrasound scan which in our setting are cheap and readily available when compared to CT scan and MRI.

In addition, Eren et al. [12], further stated that hernias that contain hollow viscera can be more difficult to investigate with ultrasound as air in the bowel and lungs as well as rib shadowing, can distort the images and make them cumbersome to analyzed. In our case bowel loops were well demonstrated probably because they were fluid filled. Similarly, Taylor et al. [13] also confirmed that Ultrasound is helpful in assessing diaphragmatic hernias that contain solid viscera.

Computed tomography, Magnetic Resonance Imaging (MRI) and barium enema of the colon or upper gastrointestinal tract contrast studies can be used to confirm the diagnosis of visceral herniation, but in our setting, the aforementioned imaging modalities are very expensive and not readily available when compared to the conventional chest radiography and ultrasound scan. In our study, plain chest radiograph and ultra-sonogram confirmed the diagnosis and further investigations with other modalities were not necessary.

A cystic intrathoracic medial mass on chest radiograph can be suggestive of a Morgagni hernia. However, a differential diagnosis to consider would include pneumonia, atelectasis, diaphragmatic eventration, mediastinal lipoma, liposarcoma, abscess, and pleuropericardial cyst [14]. The actual diagnosis can be made with imaging modalities. Nevertheless, a diagnosis can sometimes be difficult and a missed diagnosis can lead to life-threatening complications such as obstruction and strangulation [15].

Plain chest radiography and ultrasonography are primary imaging modalities to consider in suspected case of diaphragmatic hernias especially in resource limited setting like ours. In this study, we highlighted the clinical presentation and radiological diagnosis as well as emphasizing the need for high index of suspicion in children with cystic intra-thoracic masses on plain chest radiograph.