Background: Performing breast self-examination (BSE) every month, starting at age 20 is an important tool in the early detection of breast cancer. Early detection of breast cancer plays a leading role in reducing mortality rates and improving patients' prognosis. Aim: The purpose of the current study was to determine Jordanian nurses' practice of BSE and knowledge about risk factors of breast cancer. Method and Material: A descriptive study design was used, with a sample of convenience 112 of registered nurses and midwives in Zarqa city, Jordan between January and March 2011. A self- administered questionnaire was used for data collection. Results: mean age of the respondents was 29.5; (SD=8.3) years and ranged from 18 to 55 years. More than half of the studied group married and 47.3% worked for more than 5 years 95.5% had no previous breast health problems and family history of breast cancer was reported by 12.5%. Only 19.4% of the studied sample performed BSE regularly. The practice of BSE was not significantly associated with socio-demographic characteristics. Conclusion: study findings suggested that there were gaps between knowledge and practice of BSE among Jordanian nurses.

Breast cancer is the most common types of cancer; the most common malignancy afflicting women as well as it is considered as a major health-threatening factor to women's health in Jordan [1,2]. In 2003, 551women were diagnosed with breast cancer; accounting for 31.8% of all female cancer cases and 16.6% of total cancers [3]. Moreover, about fifty percent of those diagnosed were aged 49 years or less and 70% had advanced cancer at the time of diagnosis [4].

While the latest statistics from the Jordan National Cancer Registry, 864 females and 9 males were diagnosed with breast cancer in 2008, accounting for 18.8% of the total new cancer cases. Breast cancer ranked first among cancer in females, accounting for 36.7% of all female cancers, and is the leading cause of deaths among Jordanian women [1]. According to Tigka et al.,5 the decline in breast cancer mortality rate during the period 1991 to 2000 in Europe could be attributed to both the improvement in early detection and the improvement of breast cancer treatment.

Nurses and midwives are the health care providers engaged in women through reproductive life [5]. Women prefer a female health care provider when discussing female-related issues, [7,8] and this is particularly true in Jordan, due to religious and cultural beliefs about male-female relationships .9 Thus, female nurses and midwives play an important role in educating women about the importance of breast self examination and understanding the risk factors of breast cancer in Jordan. To secure these objectives effectively, nurses and midwives should be aware of breast self- examination and the risk factors of breast cancer and keep themselves updated with evidence-based practice concerning these issues.

The purpose of the present study was to evaluate the knowledge and practices of breast self-examination (BSE), and find out the knowledge about risk factors for breast cancer among Jordanian nurses.

This study specifically aims to answer the following questions:

3- Is there a relationship between practices of BSE and Socio-demographic characteristics?

A descriptive correlational research design was used to achieve research objectives. The study was conducted in four hospitals at Zarqa Governorate; the largest governorate in Jordan; after Amman; the capital. The data were collected between January and March 2011. All nurses and midwives who were working in the Maternity Department and agreed to participate in the study contented the study sample (N=112).

Data were collected from January to March 2011and the study was conducted on voluntary basis.

Based on the literature review; the questionnaire was developed by the researcher and designed to assess socio-demographic characteristics, knowledge about breast self-examination and find out the knowledge of risk factors of breast cancer.

Socio-demographic characteristic data included their age, level of education, experiences years in nursing and marital status. Obstetrical history was assessed by a questionnaire asking for information about number of pregnancy, labor and respondents' age when born the first baby.

Questions regarding the practice of breast self-examination were also included: frequency of BSE; time of BSE; regularity of performing BSE and reinforcing factors for starting BSE. The reasons for not performing BSE and the source of information were also assessed. As well, BSE knowledge and breast cancer risk factors were assessed with questions.

The respondents were asked to indicate what they were taught about these statements and a gradient of responses was provided such as "yes", "no", "don't know" for all the statements. Thirty two questions were comprised to determine the individual's level of knowledge. The knowledge score was computed by totaling the number of correct answers for all questions. The knowledge score was re-coded into dichotomous variables by taking mean value as a cut off value to evaluate knowledge levels, coded insufficient= 1 and sufficient = 2. Univariate risk analysis was performed with the socio-demographic variables and knowledge levels.

A pilot study was conducting on ten nurses at the morning shift from one the aforementioned settings. The purpose of the pilot study is to test study feasibility and determine the time required for the completion of the questionnaire. The research assistant approached the nurses in the hospitals (the work places) on the different shifts after she was trained on the data collection. The answered questionnaire was returned directly to the research assistant or via the office of the head nurse of mentioned departments.

Approval was obtained from Institutional Review Board committee (IRB) at Zarqa University and directorates of relevant hospitals. A verbal informed consent was obtained from participants before answering the questionnaire. Each questionnaire enclosed a covering letters including purpose of the study along with the instructions for participants and contact details of the researcher. In addition the questionnaire was placed anonymously and participants were assured that all information will be kept strictly confidential and used only for the research purposes.

Of the 112 nurses participated in the research, 90.1% were nurses and 9.9% were midwives. The mean age was 29.5; (SD8.3) years and ranged from 18 to 55 years. Slightly more than half of the respondents were married and less than half worked for more than 5 years. The overwhelming majority of the studied group (95.5%) not had any previous breast health problems. Twelve point five percent of the studied sample mentioned that they had a family history of breast cancer (table 1). 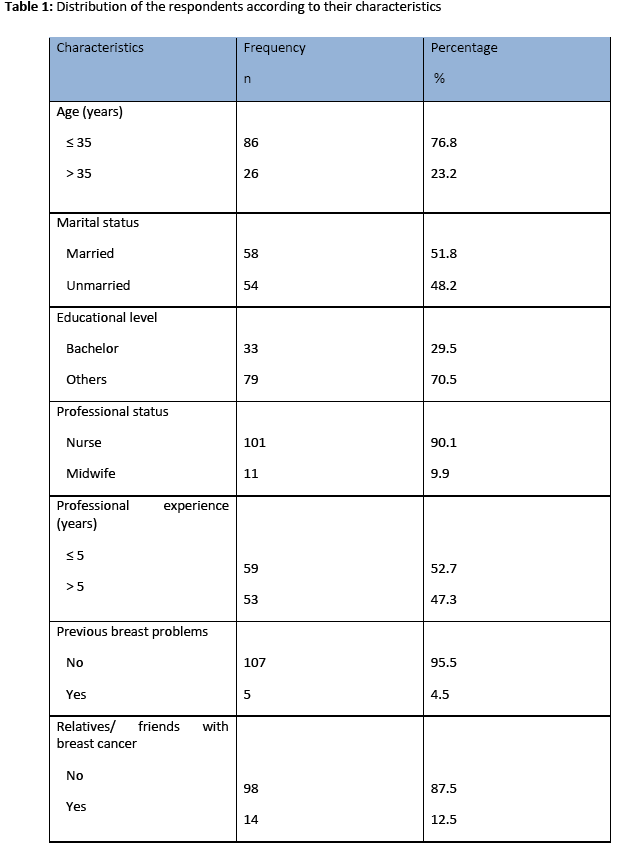 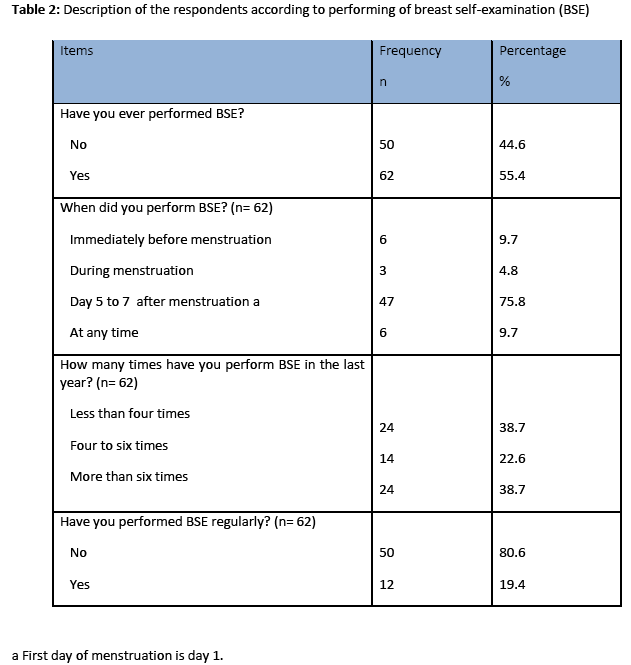 Table (3) indicates that, of the women who performed BSE, 66.1% mentioned that it was due to fear from breast cancer, while almost three fifths (59.75) mentioned it gave them a sense of control over their own health by early detection of breast cancer, "having a close relative and friend with breast cancer" (11.3%). Less than third of participants (32.3%) felt reassured as announced in media that they may not have breast cancer after performing the BSE procedure.

For those participants who did not performing BSE, more than third reported: "I don't believe that it is beneficial", other reasons identified for "Not having time (too busy)" (36%), and for 30% of them, it was felt "Anxiety about the possibility of recognizing a breast mass". Other reasons were due to misbelieves as it is "Wrong to touch my breast" (12%), and they also thought, "BSE embarrasses me" (22%) (table 3). 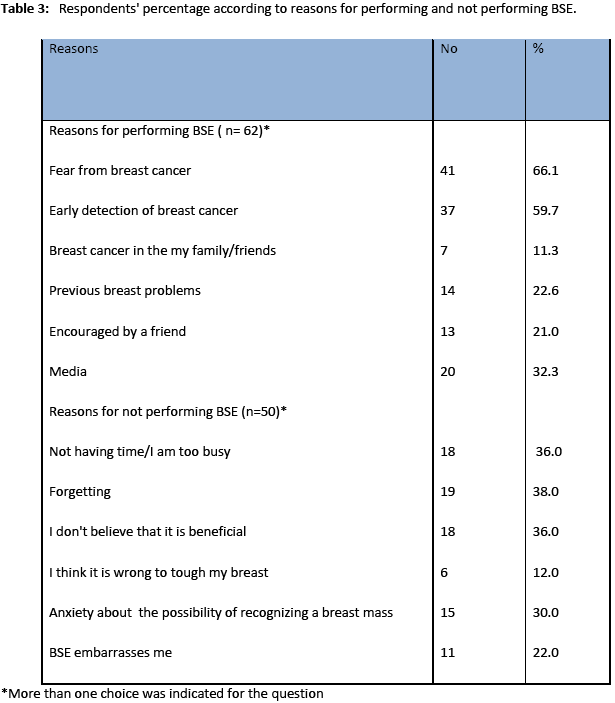 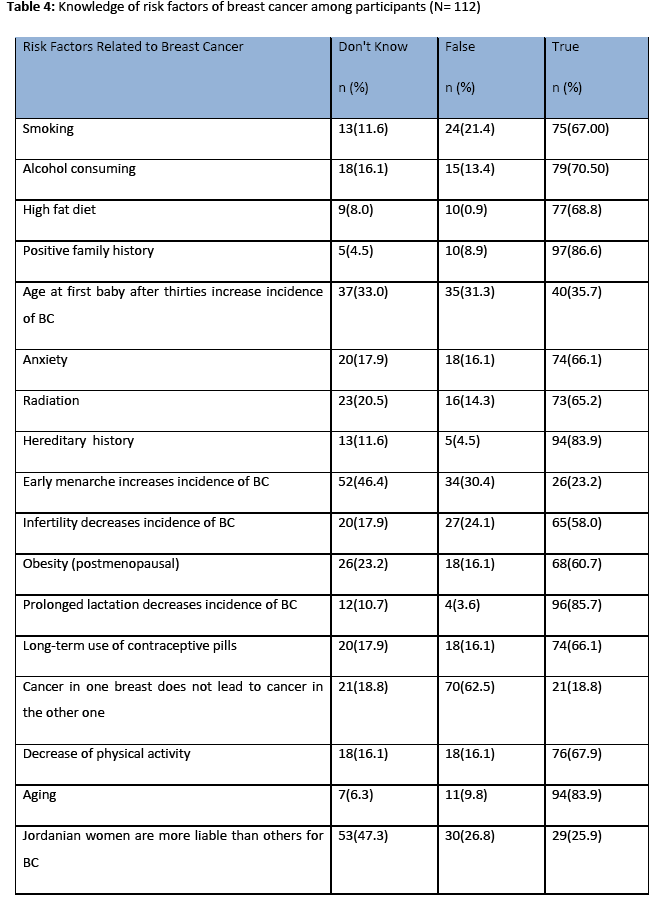 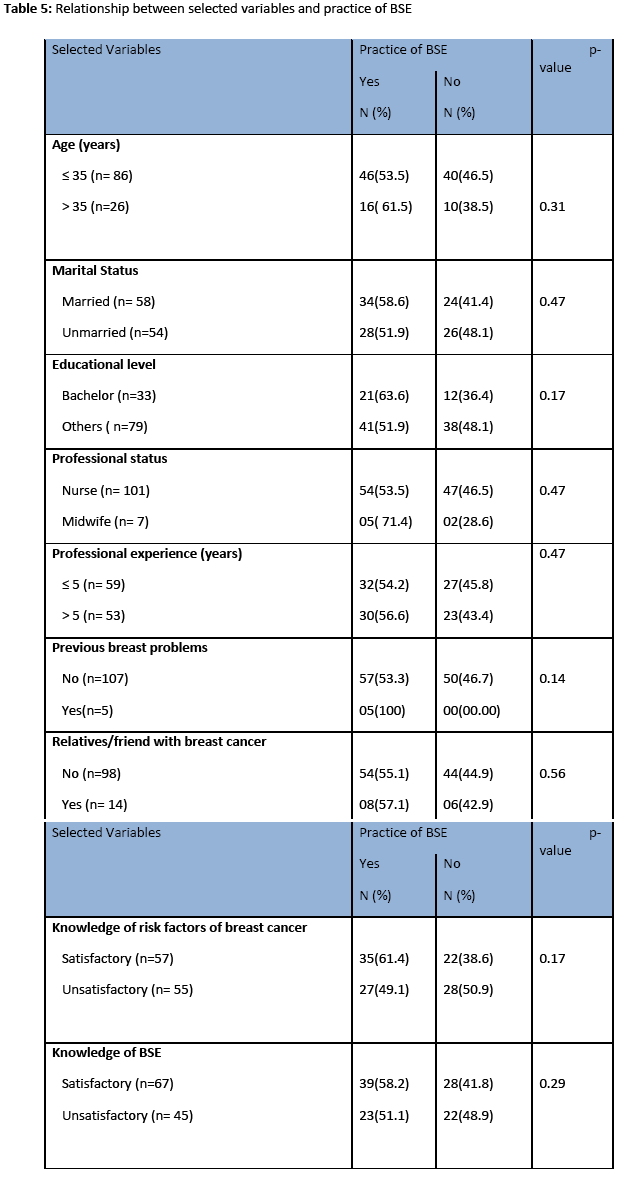 The earlier detection through screening, the increased awareness and improved treatment, are believed to have decreased the breast cancer mortality rate [5]. Nurses should understand the clinical effectiveness of any screening tool they advocate [10].

The maternity nurse and midwife can contribute to the secondary prevention of breast cancer through educating the women on the way the breast-self-examination should be conducted. BSE-related awareness and practices of female Jordanian nurses and midwives who teach BSE to the women were determined. In the present study, although more than half of the respondents reported that they were performing BSE, only less than fifth (19.4%) of them performing BSE regularly.

These findings matched with those of a research carried in 2009, on Jordanian nurses, in which less than fifth of them practice BSE on regular basis as recommended [2]. In Jordanian women, only 18% of the participants reported that they practiced BSE on monthly basis ,[11] contrary to other findings in Turkey, [12,13] Singapore [14] and in the USA [15].

The finding of the present study might explain the decreased awareness of Jordanian women about early detection methods of breast cancer [2].

In the present study, more than one third of respondents mentioned that they did not have time, they forgot to perform BSE, they didn't believe that the BSE is beneficial. In addition, they thought it was wrong to touch their breasts. The present results are similar to that of another study results conducted by Rosvold et al., [16] on Norwegian female physicians who stated that they forgot to practice BSE regularly.

It is also important for an obstetrical nurse and midwife to be able to educate the women on the need for primary prevention, so as the women to adopt a lifestyle by reducing the modifiable risk factors, e.g., smoking, alcohol consuming, unhealthy diet, anxiety, exposure to radiation, obesity, use of hormonal pills for a long period, positive family history and also delayed childbearing. The participants in the present study had a high percentage of true answer regarding risk factors of breast cancer and BSE; this is in agreement with the results of Tigka et al., [5] who conducted a comparative study of knowledge of breast cancer screening of Greek and Italian student midwives.

Majority of the participants know that a positive family history is a risk factor. This finding is similar to the results of previous studies [17,18]. But this proportion was higher than those from the other studies. 19, 20 Other risk factors concerning lactation, hereditary, alcohol consuming was known more by the studied group. This result is supported by the finding of another study ,[17] carried out in 2006, entitled breast cancer awareness and practice of BSE among primary health care nurses: influencing factors and effects of an in-service education.

The findings of the current study showed that several factors (age, marital status, education, years of experience, previous breast problems, had relative with breast cancer and level of knowledge) was found to be associated with the practice of BSE.

Nurse practitioners as educators need to teach all females attending various health care settings about the importance of BSE in early detection of breast cancer. Based on the previously mentioned findings the following can be concluded: Almost half of nurses in the maternity departments did not perform BSE. There were gaps between nurses' knowledge and their practices of BSE. This might be due to cultural believe that breast touching is as immoral. Therefore, improving nurses' awareness about the importance of performing BSE is massively needed. It is also important that nurses' believe on the importance of BSE and perform it on a regular basis; this will be reflecting on their patients. Further research studies should be undertaken on the Jordanian nurses to investigate the factors that hinder them from practicing BSE and dealing with an early detection of breast cancer.

This work was funded by the deanship of research and graduate studies at Zarqa University in Jordan.

The researcher would like to thank the nurses and midwifes (studied sample), and the staff at the hospitals in Jordan for their valuable help and support.