Recently, Catheter associated urinary tract infections (CA-UTIs) have received little attention compared to many of the other types of healthcare associated Infections (HAIs). The CA-UTI It is one of the most common health care- associated infections in critical care setting [1].

The CA-UTI can lead to increased length of stay, higher morbidity and mortality and increased healthcare costs. Possible complications of an occurrence of CA-UTI may include urethritis, urethral strictures, hematuria, bladder obstruction and sepsis secondary to the CA-UTI. Also, a urinary drainage bag containing large numbers of undetected resistant organisms becomes a reservoir of potential pathogens that can result in more serious HAIs [2]. The most important risk factor for the development of nosocomial CA-UTIs, especially in the intensive care setting, is the presence and care of urinary catheter (UC) and the method of catheterization [1,3].

In many cases, catheters are placed for inappropriate indications, and health care providers are unaware that their patients have catheters, leading to prolonged, unnecessary use [4,5].

Among hospital-acquired conditions, CA-UTI presents an interesting challenge. Hospital use indwelling urinary catheters more than almost any other medical device. By so doing, however, indwelling catheters are associated with foreseeable and largely preventable CA-UTIs. The use of indwelling urinary catheters accounts for 80% of nosocomial CA-UTIs [6] estimated at up to 1 million cases annually and 40% of all nosocomial infections [7-9]. The consequences of a CA-UTI range from an additional hospital day to bacteremia, prosthetic joint infection, and death [10]. In total, nosocomial CA-UTI cost the health care system more than £400 million annually [11].

According to the new rule of Centers for Medicare and Medicaid Services (CMC) for patients discharged on or after October 1, 2008, with complication or co morbidity of CA-UTI, hospitals will be paid as if the complication or co morbidity were not present (i.e., they will not receive additional payment) if the CA-UTI was not present at the time of the patient’s admission to the hospital. To facilitate the determination of a present-on admission condition, the CMS has developed a present-on admission indicator that must be reported for each secondary condition on claims for all discharges on or after January 1, 2008 [12].

Guidelines from the Centers for Disease Control (CDC) and the society for Healthcare Epidemiology of America/Infectious Diseases Society of America describe various interventions for CA-UTIs in intensive care units (ICUs) [13,14]. Each of these recommendations is categorized on the base of existing scientific evidence, theoretical rationale, applicability, and potential economic impact.

As part of the 5 Million Lives campaign endorsed by leading US agencies and professional societies, The Institute for healthcare Improvement (https://ww.ihi.org/ihi) recommends that all intensive care units (ICUs) implement a bladder bundle aimed at reducing the incidence of CA-UTI to zero [5]. However, in ICUs, USs might be needed for extended periods, and the duration of the catheterization is the most important risk factor for the development of a CAUTI [15,16]. In addition, ICU patients may be colonized with hospital acquired organisms, and sometimes a UC must be inserted in urgent situations when optimal attention to aseptic technique might not be feasible. Recent data suggest that non ICU medical wards have considerably lower device utilization rates than medical ICUs [17].

The objectives of this study were to determine the incidence rate, excess length of stay and excess antibiotics cost of patients with CA-UTIs in two medical/ surgical ICUs.

This prospective observational study was carried out in two medical/surgical ICUs, in Athens, Greece, from January to December 2010. The units are part of the referral center that serves mainly the region of Athens.

During the surveillance period, all patients admitted to ICU and ventilated for at least 48 hours were actively monitored for CA-UTIs until their discharge or death. It included daily clinical examination of patients and daily reviewing of the patient’s medical records and Kardex data. Data collected for each patient were recorded on a standardized survey record form. Patient data included demographic characteristics, disease severity determined by the Acute Physiology and Chronic Health Evaluation (APACHE) II score on admission, co-morbidity determined by the weighted Charlson co-morbidity index on admission, date of CA-UTI onset, type and duration administrated antibiotics. The diagnosis of CAUTIs was based on definitions proposed by CDC [18]. The study protocol was approved by the institutional review board at each hospital and patient confidentiality was protected.

Continuous variables are expressed as mean ± standard deviation (SD) or median (interquartile range) in case of skewed datawhilecategorical variables are expressed as a percentage of the total number of patients analyzed. The Kolmogorov-Smirnov test and graphs (histograms and normal Q-Q plots) were used to test the normality of the distribution of the continuous variables. Differences between groups were evaluated using χ2 test or Fisher’s exact test for categorical variables and Student’s t test for continuous variables following a normal distribution or the Mann-Whitney U-test for those who failed the normality test. All tests of statistical significance were two-tailed, and p-values of less than 0.05 were considered significant. Statistical analysis was performed using the Statistical SPSS software, version 20. 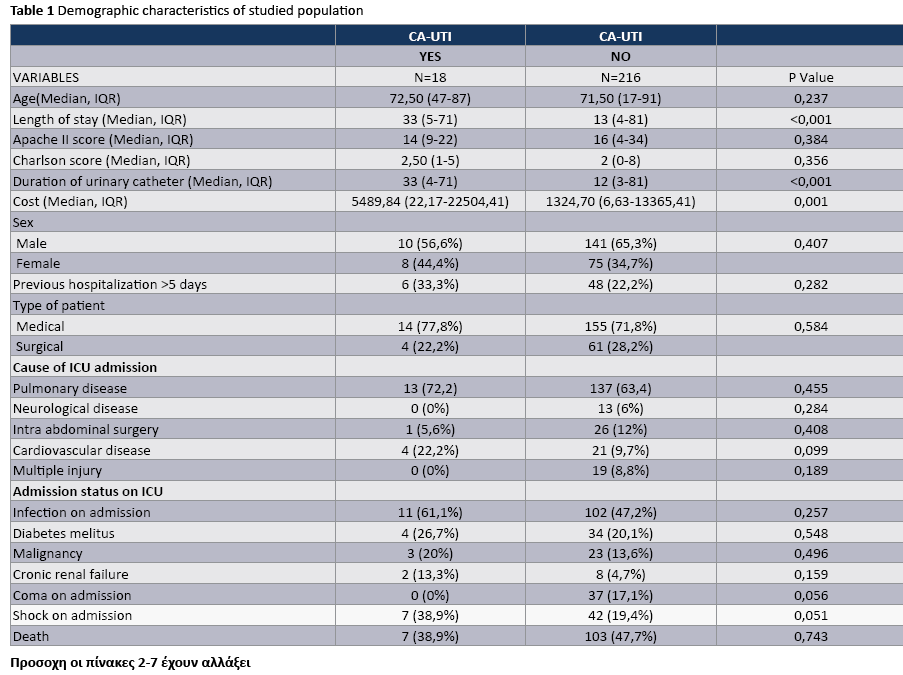 The most frequently isolated pathogen was Candida (55,5%) following by A. baumannii (16.7%) and P. aeruginosa (16.7%). The onset of CA-UTI was more likely to occur during the first 10 days after ICU admission (Figure 1). 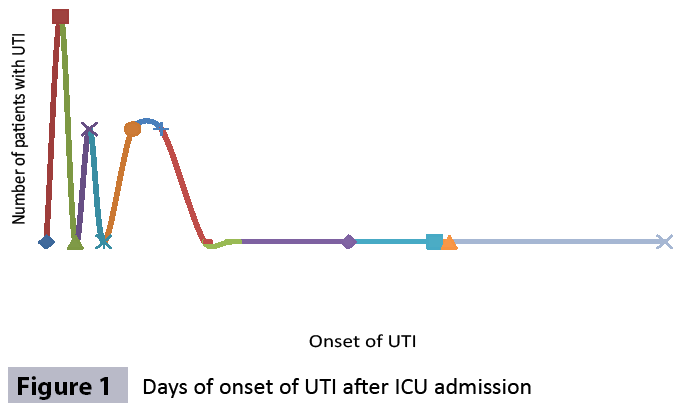 Figure 1: Days of onset of UTI after ICU admission

Eliminating healthcare associated infections (HAIs) has been identified as an important priority in many US hospitals [15], especially since Medicare no longer provides increased payments for treatment of CA-UTIs. This is not the situation in Greek hospitals.

Moreover, according to the CDC’s NHSN the highest CA-UTI rates were in burn ICUs followed by inpatient medical wards and neurosurgical ICUs. The lowest rates were in medical/ surgical ICUs (1.3 infections per 1000 catheter days) [19]. In the present study the incidence density of CA-UTI (4.09 cases/1000 urinary catheter- days) was lower than that identified in Egypt [21] (15 cases/1000 urinary catheter- days), considerably higher than that reported by NHSN report for 2010 and similar to that reported in a previous study in Sao Paolo (5 cases/1000 urinary catheter-days) [15]. These differences could be attributed to many reasons: disease severity, limited funds and resources for infection control, insufficient numbers of experienced nurses and lack of established urinary catheter bundle which includes: daily assessment for removal of the urinary catheter, maintaining the urine drainage bag below the bladder, sustain a closed system, using a securing device to prevent movement of the catheter.

Although morbidity and mortality from CAUTI is considered to be relatively low compared to other HAIs, the high prevalence of urinary catheter use leads to a cumulative burden of infections with resulting infectious complications and deaths. An estimate of annual incidence of HAIs and mortality in 2002, based on a broad survey of US hospitals, found that urinary tract infections made up the highest number of infections (>560,000) compared to other HAIs and attributable deaths from UTI were estimated to be over 13,000 (mortality rate 2,3%) [22] and while fewer than 5% of bacteriuric cases develop bacteremia [10], CAUTI is the leading cause of secondary nosocomial bloodstream infections; about 7% of hospital acquired bacteremias are from a urinary source, with an associated mortality of approximately 10% [23]. An important finding in the present study was the high crude unadjusted attributable mortality (22.8%) among patients with CA-UTI and among patients with CA-UTI caused by Candida spp, which could be attributed to the underlying disease severity. Some argue that acquisition of bacteriuria is merely a marker of severe underling disease or deficient immunity and non an independent risk factor for death. Our results highlight that the interventions to reduce CA-UTIs should be a priority in our ICUs. While there are no large multicenter trials to date, several single-institution prospective studies have examined multimodal CA-UTI preventions. These studies have used nurse and physicians education, surveillance and feedback, computerized prompts nursing-driven protocols, and various technologies (blander scanners, silver-alloy catheters) to achieve reductions in CA-UTIs by 46% to 81% in a variety of inpatient settings [24-26].

The ecology of nosocomial CA-UTIs in particular and HAIs in general has changed strikingly during the past three decades. The most frequent pathogens associated with CA-UTI in hospitals reporting to NHSN between 2006-2007 were Escherichia coli (21%) and Candida SPP (21.0%) followed by Enteroccocus SPP (4.1 %), Pseudomonas aeruginosa (10%) klebsiella pneumonia (7.7% and Enterobacter spp. (4.1%). A smaller proportion was caused by other gram-negative bacteria and Sthaphylococcus spp. [27]. In our study the most frequently isolated pathogen was Candida spp (55,5%) following by Acinetobacter baumannii (16.7%). Similarly, in a study in Egypt Candida constituted approximately 50% of isolated pathogens [21]. High rates of candiduria in ICU patients have been associated with use of systemic antibiotics [28].

To our knowledge, this is the first study prospectively examines the antibiotic costs associated with CA-UTIs and stratify costs according to the type of infection and infecting organism. A recent time-dependent analysis in ten developing countries found that a CA-UTI prolonged length of ICU stay by an average of 1.59 days and increased the risk of death by 15% [29]. In other prospective studies, in Poland [30] and Morocco [31] the extra length of stay was 8.1 and 8.6 days per CA-UTI, respectively. Similarly, in the present prospective study the crude excess length of stay was 8 days and the excess antibiotic cost was 1318€ per CA-UTI. In contrast, the excess length of stay was considerably higher (36days) among patients with CA-UTI caused by P. aeruginosa than that in patients admitted without infection who did not acquire a CA-UTI in ICU. In a prospective study, which was done in the era of managed care during the late 1990s, the extra medication costs (£35,872) associated with nosocomial CAUTI were substantially lower than those reported in the largest comparable studies done more than 15 years ago, most of which were retrospective [32]. The authors suggested, It may reflect the powerful impact of cost-containment measures that are now implemented in managed care, especially the universal efforts to discharge patients earlier and if necessary, to give intravenous antibiotics in the outpatient setting. The availability of newer oral agents with activity against resistant, gram negative pathogens has also probably contributed to this cost reduction [32]. In addition, we found that the crude excess costs of CA-UTIs caused by Acinetibacter baumannii (3130€) were considerably lower than those of CA-UTIs caused by P aeruginosa (5122€) which had infections in multiple sites and often require treatment with expensive parenteral antibiotics or ever combinations of these drugs. However, other studies found that the costs of CA-UTIs caused by E. coli (£280.4) were considerably lower than those of infections caused by resistant, gram-negative organisms (£490.6). This is a cause for concern and suggests that this gains achieved by cost-containment measures could easily be rapidly lost by a continued increase in infections due to multiresistant organisms [2]. Our results are reasons for adopting the “getting to ZERO” goal as a quality indicator for patient safety and reducing of the antibiotic cost in studied population [33]. Given the clinical and economic burden of CA-UTI, infection control professionals should use the latest infection control principles and technology to reduce this complication.

These results should be interpreted in the context of several potential limitations. First, our study did not include a sufficiently large number of patients. Second, this study was performed in two medical/surgical UNITs and our results might not be generalized to other hospitals, given differences in staffing, patient populations and resources.

Our study confirms the clinical and economic burden of CA-UTIs in ICU patients and highlights the establishing comprehensive education program for all healthcare workers on evidence-based approaches, and the implementation of urinary catheter bundle, which will contribute to reducing the burden of CA-UTIs and improving quality of care and patient safety in Greek ICUs.