Oxidative stress plays a role in the immune system by killing bacteria or viruses, but it is also reported to be involved in numerous diseases, such as cardiovascular disease and cancer, as well as in aging [1,2]. Reactive oxygen is produced in excess as a result of transient, hyperintense exercise [3], and it has an oxidizing effect on healthy cells, which creates the source of diseases. The human body has two mechanisms to eliminate reactive oxygen in order to prevent oxidative stress occurring in this way: antioxidants and antioxidant enzymes. Antioxidants are substances that remove reactive oxygen by reacting directly with it, and can be ingested in food or as supplements. Antioxidant enzymes are proteins produced within the body, which act as catalysts. Active ingestion of antioxidants, which remove reactive oxidants, has been suggested as a way to prevent disease by increasing the body’s antioxidative capacity.

Carotenoids are a generic term for natural dyes biosynthesized in plants. Carotenoids may be broadly categorized into carotenes and xanthophylls [4]. While carotenes are highly hydrophobic, xanthophylls are highly hydrophilic and have a high affinity for the cellular membrane. Also, compared with carotenes, there are many more xanthophylls with high antioxidative capacity, and out of all the carotenoids, it is therefore considered particularly important to ingest xanthophylls actively. The human body is incapable of biosynthesizing carotenoids, the main source of which is green and yellow vegetables. Red paprika has a characteristic carotenoid composition of 90% xanthophylls and 10% carotenes, and is therefore an excellent source of xanthophylls [5]. For this reason, among the naturally-occurring antioxidants, we focused on xanthophylls derived from red paprika (paprika xanthophylls). Paprika xanthophylls contain high concentrations of seven types of xanthophylls, including capsanthin and capsorubin, which are rare components characteristic of red paprika, and β-cryptoxanthin, which is useful for the prevention of lifestylerelated diseases.

Nishino et al. [6] reported that the capsanthin and capsorubin contained in paprika xanthophylls demonstrate elimination activity against not only singlet oxygen, but also hydroxy radicals, which have strong oxidative capacity. They also showed that at 2 weeks after ingestion of carotenoids, the carotenoid concentration in the erythrocytes increases to 2.2 times the pre-ingestion level. It is therefore safe to say that continued ingestion of paprika xanthophylls increases the total carotenoid concentration of erythrocytes.

A plentiful supply of oxygen to the active muscles is needed during exercise. Oxygen that is taken into the body binds to hemoglobin in the erythrocytes and is transported to all parts of the body. The peripheral capillaries have such a fine diameter that erythrocytes need to change shape to pass through them; this function is known as erythrocyte deformability [7], and is related to the flexibility of the erythrocyte membrane. Damage to the erythrocyte membrane by reactive oxygen reduces erythrocyte deformability [8], which would likely be linked to a reduction in erythrocyte oxygen-carrying capacity. It has recently been reported that ingestion of lutein, a type of carotenoid, leads to the increased distribution of lutein to erythrocytes and a decrease in the quantity of fatty acid peroxides [9]. It is therefore likely that continuous ingestion of paprika xanthophylls with high antioxidative capacity leads to increased xanthophyll distribution to the erythrocytes, resulting in suppression of the damage caused by reactive oxygen and improvements in oxygen-carrying capacity. In the present study, the effects of ingestion of paprika xanthophylls on oxidative stress and respiratory metabolism during endurance exercise were investigated.

The participants were 21 male university student athletes (six rubber-ball baseball players, six short-distance track and field athletes, four racing cyclists, two lacrosse players, two cheerleaders, and one speed skater). All participants habitually exercised 5 or more days a week, and did not smoke. Compliance with the rules for research using human subjects, protection of personal data, and the ethical considerations of the present study were approved by the relevant ethics review committee. In accordance with the Declaration of Helsinki, all participants were provided verbal and written explanations of the ethical considerations of the study, and provided their written, informed consent to participate. In addition, this experiment was registered in the University Hospital Medical Information Network (UMIN) Clinical Trials Registry (UMIN000028271).

This randomized, double-blind, intergroup, comparative study was designed in accordance with the Consolidated Standards of Reporting Trials. The participants were assigned to either the paprika xanthophylls (PA) group (n=11) or the placebo (CON) group (n=10) such that there were no major differences between the groups in physical characteristics or previously measured peak oxygen consumption (VO2 peak). Study measurements were carried out before and at 4 and 8 weeks after ingesting the experimental product (Figure 1).

A commercial paprika xanthophylls preparation (“PapriX-oil”; Glico Nutrition Co., Ltd., Osaka, Japan) was used as the source of ripe paprika xanthophylls. Gelatin capsules containing PapriXoil (containing 4.5 mg of total xanthophylls, including 2.6 mg capsanthin and 0.4 mg β-cryptoxanthin per capsule) were used as the study drug. Gelatin capsules containing vegetable oil and caramel color so that they were indistinguishable from the study drug were used as placebo. All participants orally ingested one capsule every evening with a meal for 8 weeks.

Prior to the experiment, VO2 peak was measured in all participants using a cycle ergometer (Corival 1000S; Lode B.V., Groningen, The Netherlands) with a multistep, gradually-increasing load. After resting for 1 min, the participants warmed up with a load of 40 W. The exercise load was subsequently set to 60 W and then increased to 110 W, 150 W, and 190 W at 3-min intervals. The load was set to increase by 15 W at 1-min intervals from 12 min after the start of exercise, and exercise was continued until total exhaustion. The pedaling cadence was maintained at 60 rpm. Exercise was stopped at the point when the participant was either no longer able to maintain the cadence, the respiratory quotient (RQ) exceeded 1.2, or the maximum heart rate (HR) (220 - age in years) was exceeded.

After resting for 1 min, warming up was carried out at an intensity of 40 W for 2 min using the cycle ergometer, and cycling was then carried out for 30 min at 60% of the previously measured VO2 peak.

Blood was collected to measure the carotenoid levels in the plasma and erythrocytes before and at 4 and 8 weeks after ingestion of the experimental product. Blood (10 mL) was collected in a heparin vacuum tube and left at room temperature for 30 min. It was then centrifuged (1000 × g) for 10 min at room temperature to separate the plasma and erythrocytes. The erythrocytes were washed four times in phosphate buffer solution (pH 7.2) to remove the leucocytes. Plasma and erythrocyte samples were stored at -80°C until analysis. Analysis of the carotenoid content of plasma and erythrocytes was carried out at the Research Institute for Production Development according to a previously reported method [4]. Total carotenoids was calculated from the sum of -carotene, β-carotene, lycopene, β-cryptoxanthin, 3-OHb, e-caro-3’-one, cryptocapsin, cucurbitaxanthin A, capsanthone, lutein, zeaxanthin, and capsanthin; total xanthophylls was calculated from the sum of β-cryptoxanthin, 3-OH-b, e-caro- 3’-one, cryptocapsin, cucurbitaxanthin A, capsanthone, lutein, zeaxanthin, and capsanthin. 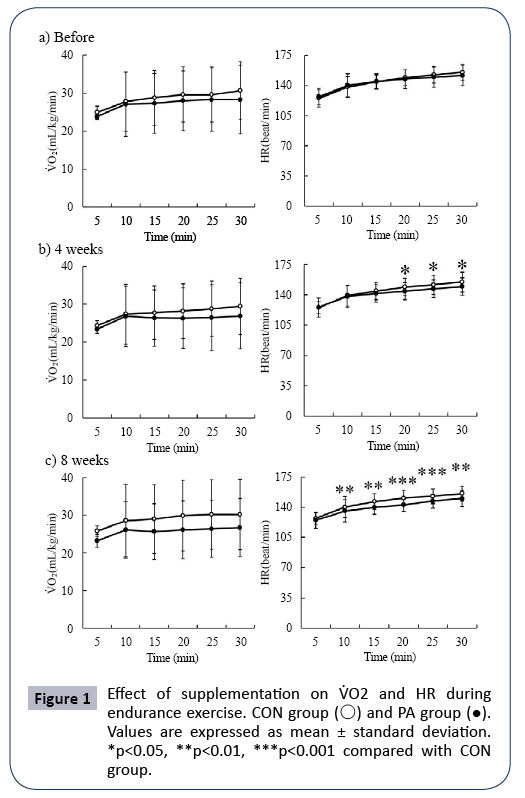 Figure 1: Effect of supplementation on VO2 and HR during endurance exercise. CON group

Table 1 Physical characteristics of the participants.

Values are expressed as mean ± standard deviation. There is no significant difference.

Table 2 Changes in total carotenoids and xanthophylls on erythrocyte and plasma in between groups.

It has been reported that when -tocopherol and eicosapentaenoi acid (EPA), which has antioxidative properties, is administered orally, there is an increase in the blood level of -tocopherol during and after administration and improvement in erythrocyte deformability [11,12]. In the present study, the absorption of xanthophylls into erythrocytes as a result of paprika xanthophylls ingestion was confirmed. Furthermore, EPA intake significantly decreased heart rate during bicycle exercise as compared with pre-intake heart rate [13]. Moreover, the changes in flowmediated dilation (FMD) before and after EPA intake was significantly greater compared with the placebo group [14], demonstrating that the blood vessel function in transporting oxygen improved because the blood vessels could be dilated more easily. Based on the above reports, antioxidant supplement intake improves erythrocyte deformability, thereby decreasing heart rate during exercise and enhancing the function of blood vessels that transport oxygen. In the present study, heart rate during bicycle exercise was significantly lower in the PA than in the CON group during 16-30 min of exercise at 4 weeks after intake and during 6-30 min of exercise at 8 weeks after intake. These results suggest that the intake of paprika xanthophyll, which exhibits antioxidative effects, improves erythrocyte deformability and decreases heart rate, thereby ameliorating exercise efficiency.

VO2max, which is commonly used as an index of endurance, is determined through both extrinsic and intrinsic factors. Intrinsic factors include lung ventilatory, lung diffusion, circulatory, tissue diffusion, and muscle oxygen consumption capacities, and are mainly related to oxygen transport and consumption in the body [15]. To transport as many oxygen molecules as possible to active muscles during maximum work, a large volume of blood needs to be pumped out from the heart. Athletes who perform endurance training on a daily basis have markedly greater stroke, heart, and end-diastolic volumes [16]; thus, they display high oxygen transport capacity and are known to have a higher VO2max than the general population [17]. Moreover, it has been demonstrated that a higher VO2max results in a lower resting heart rate [18]. Furthermore, blood volume, erythrocyte count, and Hb levels increase by infusing blood, leading to improved oxygen transport capacity and an increase in VO2max [19,20]. Based on these findings, increasing oxygen transport capacity by increasing stroke volume and decreasing heart rate can promote endurance performance. Even though the bicycle exercise in the present study was performed under the same protocol before intake, and at 4 and 8 weeks after intake, heart rate decreased in the PA group (4 weeks; p<0.05, 8 weeks; p<0.01, p<0.001). Therefore, paprika xanthophyll intake appears to improve erythrocyte deformability and oxygen transport capacity, thereby facilitating exercise with a low heart rate, even under the same exercise stress. These findings indicate that such intake may enhance endurance performance.

The present study has some limitations. This study is no significant differences in the levels of total carotenoids or total xanthophylls in the plasma were found between the two groups at any time point. The levels of total carotenoids and xanthophylls in the plasma are likely affected by the previous day’s meals; however, this was not controlled for in the present experiment, so this remains a topic for future investigation.

In conclusion, the results of the present study show that the oxygen-carrying capacity of erythrocytes increased as a result of the absorption of carotenoids, particularly xanthophylls, into the erythrocytes. This suggests that the increase in the oxygencarrying capacity of erythrocytes caused a reduction in the HR during endurance exercise, so that energy efficiency increased. From the foregoing, it is likely that the continuous ingestion of paprika xanthophylls can improve endurance.

We also thank Dr. Takashi Maoka of the Research Institute for production Development for analyzing the blood carotenoids in this study.

No financial or material support of any kind was received for the work described in this article.