Evaluation of Chest Radiographic Patterns and Its Relationship with Hematological Parameters in Patients with Pulmonary Tuberculosis in Lagos Metropolis, Nigeria

Copyright: © 2019 Akhigbe RO, et al. This is an open-access article distributed under the terms of the creative commons attribution license, which permits unrestricted use, distribution and reproduction in any medium, provided the original author and source are credited.

Background: Pulmonary Tuberculosis (TB) is a major cause of morbidity and mortality worldwide. It is a major public health challenge in Nigeria with an estimated prevalence of 616 cases per 100,000. The aim of this study was to identify chest radiographic patterns in patients with pulmonary tuberculosis in Lagos Metropolis and investigate the relationship between these patterns and hematological parameters. Materials and Methods: A prospective cross sectional study design was adopted in this study. All the investigations were performed using standard protocols and parameters by both Radiographers and Medical Laboratory Scientists with the necessary equipment’s such as static X-ray machine and SWELAB Haematology analyzer (Manufactured by Sysmex Corporation Kobe, Japan). The anthropometric variables (height, weight, and Body Mass Index BMI) for all the subjects were measured and documented. All confirmed TB subjects at the time of diagnosis were subjected to chest X-ray investigation, ESR (Erythrocyte Sedimentation Rate) measurement and full blood count analysis. The reports were recorded with the subject’s biodata and anthropometric variables. Results: Males were 131 (72.4%) with a mean age of 34.77 ± 9.23 years and 50 (27.6%) were females with a mean age of 32.16 ± 8.72 years. All the patients had increased Erythrocyte Sedimentation Rate (ESR) and 98% had anaemia while about 71% of the patients presented with increased lymphocytes count. The radiographic patterns identified in this study were consolidation (57.5%) as highest and the least was pleural effusion (1.1%). The result of correlation analysis of ESR, WBC and PCV (Packed Cell Volume) showed no statistically significant correlation between ESR (r=-0.649, p=0.16), PCV (r=0.549, p=0.26), WBC (White Blood Cell) (r=-0.325, p=0.53) and the various chest radiographic patterns. Conclusion: This study revealed that the most predominant chest radiographic pattern is consolidation with pleural effusion as the least. There was no statistically significant relationship between the various chest radiographic patterns and hematological parameters in patients with pulmonary tuberculosis in Lagos Metropolis.

Pulmonary Tuberculosis (PTB) is a contagious bacterial infection that mainly involves the lungs, but may spread to other organs and is caused by the bacteria Mycobacterium tuberculosis [1-3]. The disease spreads by droplet infection when people suffering from PTB (Pulmonary Tuberculosis) expel bacteria, for example by coughing. Tuberculosis (TB) is a major cause of morbidity and mortality throughout the world [4]. One third of the world’s population is infected with the TB bacillus [4]. The WHO cites TB as the single most important fatal infection, with around 8.8 million new cases and 1.4 million deaths per year with 95% in developing countries [4]. Tuberculosis is a major public health problem in Nigeria with an estimated prevalence of 616 cases per 100,000. Nigeria ranks first in Africa and eleventh among the 22 high TB burden countries in the world [5-7]. No fewer than 460,000 cases of tuberculosis are reported annually in Nigeria [4]. Patients with pulmonary tuberculosis may present with protean clinical manifestations and its diagnosis may prove quite difficult sometimes. But, since it is a curable disease, accurate diagnosis is essential. The definitive diagnosis of pulmonary tuberculosis is commonly the isolation of the tubercle bacilli from the patients’ sputum, either by direct microscopy or by culture. Chest radiography has been used over the years for the diagnosis of pulmonary TB. However, it is limited by modest specificity and a high interobserver variability in radiological reports [4]. Cohen et al. [8] found a sensitivity of 73%-79% and a specificity of 60%-63% in a high risk population. Similar results were found by Kisembo et al. [9] who compared the diagnostic value of typical TB symptoms (cough, sputum production, fever, weight loss, night sweats, hemoptysis, anorexia, and dyspnea) with chest radiograph in TB prevalence survey. A simplified scoring system has been recently proposed for reliable diagnosis of TB on chest radiograph [1]. The features on chest radiograph include: upper lobe opacities, cavities, unilateral pleural effusion and mediastinal and hilar adenopathy (Figure 1). Pulmonary tuberculosis may produce reversible abnormalities of peripheral blood. Tuberculosis can cause diverse hematological abnormalities such as anemia, increased erythrocyte sedimentation rate and thrombocytopenia [3,10,11]. Hematological abnormalities have been associated with TB and response to drug therapy [5,12,13]. The rate at which new TB cases occur varies widely, even in neighboring countries, apparently because of differences in health care systems and the changes associated with TB have been incompletely investigated [14,15]. Hematological profiles are those parameters of the blood forms (red blood cells, white blood cells and platelets) with normal range or value as reference for any value to know whether or not they are normal [13,16]. Rise in hemoglobin and hematocrit levels are used as markers reflecting response to treatment in pulmonary TB patients [5,13,16]. Decrease in platelet count and in white cell count and reduction in Erythrocyte Sedimentation Rate (ESR) were regarded as good indicators to observe drug response and disease control. Previous study has shown that anaemia, raised ESR, peripheral leucocyte count and neutrophilia are the most common hematological manifestations associated with PTB [17]. Pulmonary tuberculosis is a major public health concern in Nigeria where there are approximately 616 cases of TB per 100,000 people. However, rates vary dramatically by area of residence and socioeconomic class [3,4]. The morbidity of tuberculosis has direct relationship with hematological indices and could also manifest as presentations on chest X-ray [1,5,13,16]. To the best of our knowledge there is no documented study evaluating hematological parameters in patients with pulmonary tuberculosis and their relationship with chest X-ray patterns in Lagos Metropolis, Nigeria. Therefore, this study was designed to investigate the relationship between the various chest radiograph patterns and hematological parameters in patients with pulmonary tuberculosis in Lagos Metropolis. The following specific objective was also assessed; to investigate the correlation between chest radiographic patterns and hematological parameters such as (Hb, WBC, platelet count and ESR). 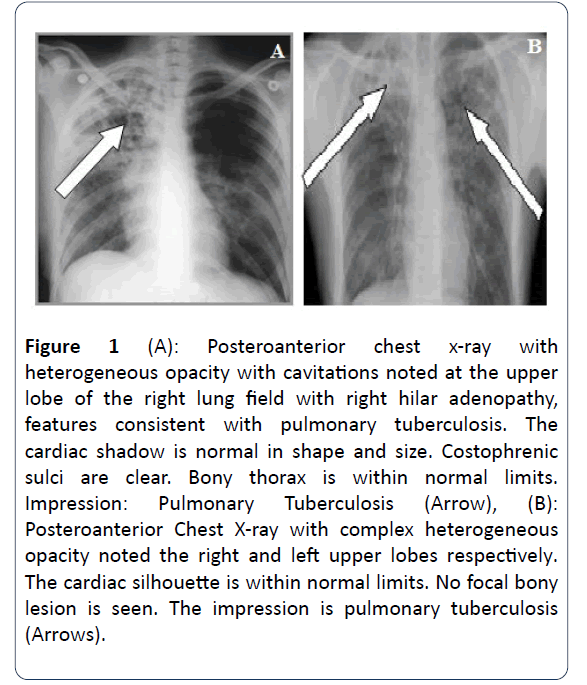 Figure 1 (A): (A): Posteroanterior chest x-ray with heterogeneous opacity with cavitations noted at the upper lobe of the right lung field with right hilar adenopathy, features consistent with pulmonary tuberculosis. The cardiac shadow is normal in shape and size. Costophrenic sulci are clear. Bony thorax is within normal limits. Impression: Pulmonary Tuberculosis (Arrow), (B): Posteroanterior Chest X-ray with complex heterogeneous opacity noted the right and left upper lobes respectively. The cardiac silhouette is within normal limits. No focal bony lesion is seen. The impression is pulmonary tuberculosis (Arrows).

This is prospective cross sectional study which was a collaborative work that involved the Radiology department, Medical laboratory department and the TB clinic at the Badagry general Hospital. The TB status of the subjects was confirmed by culture of the sputum for Mycobacterium tuberculosis. The anthropometric variables (Height in meters, weight in kg, and Body mass index BMI in kg/m2) for all the subjects were measured and recorded. All confirmed TB subjects at the time of diagnosis were subjected to chest X-ray investigation, ESR measurement and Full blood count analysis. The reports were recorded with the subject’s biodata and anthropometric variables (Height, weight, BMI). Chest X-ray with standard protocol and parameters were performed by a licensed Radiographer using GE static X-ray unit with an erect bucky stand. Chest radiographs were interpreted by two independent certified consultant radiologists. The Full blood count to determine hematological parameters such as Packed Cell Volume (PCV), White blood cell count and platelet count used in this study was conducted by council certified Medical Laboratory scientist using SWELAB Haematology analyzer (Manufactured by Sysmex Corporation Kobe, Japan). The inclusion criteria includes; confirmed TB patients aged 18-65 years at the TB clinic within the study period, all confirmed TB patients who consented to participate in the study and those that did not meet the inclusion criteria were excluded. A total of 181 subjects formed our sample size calculated using Yamane’s Formula [18] using non-probability sampling method based on the study inclusion criteria.

In accordance with Helsinki Declaration, approval for this study was obtained from the Human Research Ethical Committee (HREC) of the Lagos University Teaching Hospital. The procedure was explained to the subjects including the study aims and written informed consent was obtained from each subject before enrolling into the study. Data collection was done using structured proforma and were analyzed using Statistical Package for Social Sciences SPSS (Version 21) software. The statistical analysis was performed using both descriptive and inferential (Correlation analysis and Chisquare) statistical tools with statistical significance set at p<0.05. 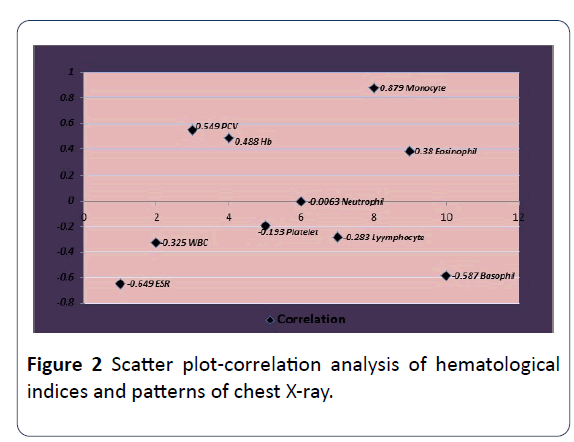 Consolidation was the most common chest radiographic patterns of tuberculosis in this study followed by cavitation and the least was pleural effusion. This finding is in agreement with the studies conducted by Akhigbe et al. [6] Wilcke et al. [19] and Nagwa [20]. On the contrary, Ahidjo et al. [21] and Marchie et al. [22], reported different findings from our report. Only three patients presented with normal chest radiograph in our study, this is contrary to the report by Ahidjo et al. [21] where he reported 28% normal chest radiograph. This variation may be attributed to immuno-supression in the subjects studied. In our result only six patterns of TB manifestation were identified (consolidation, cavitation, lymphadenopathy, pleural effusion, Fibrosis and normal). Additional patterns such as hilar and mediastinal adenopathy, milliary pattern and pleural thickening were identified by other researchers. This discrepancy in our findings may be ascribed to the nature of the subjects studied, the geographical variations and the imaging modality used for this study when compared to findings of other studies done with computed tomography and other imaging modalities.

In this study, 98% and 100% of the subjects had anemia and elevated ESR respectively. The platelet counts of the TB subjects in this study were within normal range. Previous studies revealed low percentage of anemia among TB patients when compared to the high percentage of anemia noted in this study. A similar study conducted in sub-Saharan Africa reported 88% in HIV positive and 77% in HIV negative TB subjects [23]. Although the last previous study reported slightly high prevalence of anemia, our study reported 97%.The differences in our findings could be attributed to HIV status, sample size and geographical variations. Our result also revealed that the PCV value was low among TB patients and this is consistent with the findings in other studies conducted by Awodu et al. [24], Agarwal et al. [25] and Nwankwo et al. [26] whereas Akpan et al. [16] and Saria et al. [27] reported higher PCV values in their findings. Akpan et al. [28] attributed the result of their study to the local diet in Calabar which consist of leafy vegetables and sea food such as fish, snails, crayfish and periwinkle when compared to staple diets which consist of little or no vegetables and seafood, found in places like Kano and Benin towns in Nigeria. The overall discrepancies between our findings and previous studies as regards the prevalence of anemia among TB patients could be ascribed to their dieting patterns which vary geographically. In this study, we discovered that there was no statistically significant correlation between the hematological parameters with exception of monocytes and the various patterns of chest radiographs identified. No statistically significant relationship between the variables studied was also noted in this study.