Materials and methods: The case group was composed of 128 biopsies obtained through apical surgery were examined establishing the diagnosis as either periapical granuloma, radicular cyst, or abscess. The radiographic size of the lesion (area in cm2) before surgery and after two years of follow-up was measured. A statistical study was performed using analysis of variance. The hypothesis tests were conducted at the 0.05 level of significance.

Clinical relevance: Apical lesions are frequently diagnosed apical pathologies of endodontic origin in human teeth. The condition is described as apical periodontitis. The common etiologic factor is the presence and colonization of microorganisms within the root canal system.

Periapical tissues can be invaded by bacteria that usually arrive via a root canal, causing inflammation and damaging the supporting tissues of teeth [1]. Apical periodontitis can be described as an “acute or chronic inflammatory lesion around the apex of a tooth caused by a persistent bacterial infection within the root canal system [2].” It may be radiographically undetectable and has an etiologic factor that starts and maintains the apical inflammation [3,4]. The bacteria living in the canal space of the infected teeth cause a tisular phenomenon against the local tissues causing radiolucency [5,6].

Acute periodontitis may lead to a sinus tract infection, and chronic periodontitis can form a barrier, preventing pulpal microbes from spreading out into the alveolar bone [7,8]. Nevertheless, microorganisms can migrate to the periapical lesions and lead to the recurrence of the inflammatory circle [9]. Residual microbes reduce the chance of apical healing and evade the host response [10,11]. The use of magnification and ultrasonic devices is highly recommended, and after the surgical procedures, guided tissue regeneration is suggested [12,13]. Contemporary concepts suggest that apical surgery could be accomplished if nonsurgical root canal or retreatment do not eradicate the latent zones of canal contamination or if earlier retreatment does not result in healing [6]. Reports demonstrate that periapical granuloma is a common apical infection of endodontic origin [6]. Many studies showed neoplastic components in some periapical lesions or, on the other hand, tumors that appears radiographically as periapical radiolucency, this may include: Odontogenic keratocyst, odontogenic tumors, glandular odontogenic cysts, lateral periodontal cysts, central ossifying fibromas or even metastatic carcinomas [6]. The absence of a radiolucency does not guarantee the absence of a persistent apical lesion, and the clinician can see radiographically. The conventional radiographic techniques lack sufficient sensitivity to serve as a reliable means of diagnosing post-treatment health [14]. Modern diagnostic devices provide clinically practical technology demonstrating the application of 3D imaging for endodontic or surgical considerations [15]. Conebeam computed tomography (CBCT) is required to support the diagnosis and control complex radicular and bone alterations [16]. CBCT imaging in endodontics needs remarkably great detail and resolution to appreciate the complexities of the root canal and periodontium [17]. CBCT is useful in detecting periapical periodontitis and apical pathosis [18-21].

Although root canal can provide successful results, apical lesions do not heal in some cases; additional procedure options may include periapical surgery or extraction [22]. This study aimed to evaluate the histopathological findings of 128 persistent apical radiolucent lesions of endodontic origin obtained during apical resective surgery. We theorized that apical granulomas caused apical radiolucency.

A total of 128 teeth with persistent apical lesions were treated with apical surgery at the Universidad Autónoma de Baja California, Facultad de Odontología, Tijuana Mexico by four different oral surgeons. The academic ethics committee approved the research under the approval number 291/2019-2. The patients were referred by their private dentists or by the staff of the dental school for apical surgery. They were informed about the surgical process, postoperative care, follow-up inspections, and alternative management options. A clinical follow-up study was conducted between October 2017 and December 2019. The patients signed a consent form according to the Declaration of Helsinki (www.cirp.org/library/ethics/helsinki).

One hundred twenty-eight patients with persistent apical lesions were treated with apical surgery after explaining the clinical processes and risks involved. The inclusion criteria for treatment planning for endodontic surgery were as follows: a) presence of persistent pain and inflammation and repeated failure of RCT; b) impossibility of retreatment owing to separated instruments, ledges, and filling material impossible to eliminate; c) necessity of biopsy; d) persistent radiolucency larger than 5 to 12 mm in diameter.

Exclusion criteria were root fracture, advanced periodontal disease, post-perforation, participants not meeting inclusion parameters, or failure to obtain the patient’s permission. All operations were performed by four experienced oral surgeons; the individual operating technique has been detailed previously [23]. Local anesthesia was used, and surgical approach was gained using complete mucoperiosteal flaps. Following flap elevation and osteotomy, the apical lesion and the root ends were located, and the necessary bone was removed using surgical burs with irrigation with saline solution to allow curettage of the apical lesion.

The osteotomy was performed using round 0.27 mm tungstencarbide drills (Jota, Switzerland) set in a handpiece and constant flushing with sterile saline solution. The affected roots were then resected approximately 3 mm from the radiographic apex. The final procedures such as root-end filling, use of bioresorbable membranes, use of bone graft for the bone defects, and the flap suture were completed in all cases. After cleaning the wound area, primary wound closure was accomplished with multiple interrupted sutures. Samples were part of the histologic collection of one of the studies, and the material comprised 128 roots from 128 human teeth. If pre-operative discomfort or swelling was present, participants received antibiotic therapy 12 hours before the procedure (amoxicillin 500 mg or clindamycin 300 mg in case of penicillin hypersensitivity). Patients were given usual postoperative guidelines and review appointments. Mouth rinse twice daily with 0.1% chlorhexidine-digluconate for seven days. Patients were seen 5–7 days after surgery for suture removal and were recalled after two years for a follow-up examination.

After surgery, the biopsies were fixed immediately for 24 hours at 4°C by immersion in 1% glutaraldehyde and 1% formaldehyde and buffered with 0.08 mol/L of sodium cacodylate (pH 7.4). The periapical lesions were gently separated from the root and labeled before processing. All the histologic procedures were developed by an Oral Pathologist. An apical granuloma was diagnosed when the injury was infiltrated with lymphocytes, plasma cells, and macrophages and had a surrounding capsule of collagen fibers. A periapical abscess was determined when a mass of PMNs dominated the granulomatous tissue. The apical lesions were identified as cysts when a cystic cavity with full epithelial lining of the cystic wall and with the collagenous capsule was observable. A distinction among pocket and true cysts was only possible in lesions attached firmly to the root apex. Periapical radiographs were taken before and during surgery and after 24 months. The images taken were standardized before being analyzed using the Micro Image Pro-Plus Image analyzing system (Media Cybernetics, Inc, Silver Spring, MD), measuring the area (cm2) of the lesion.

Statistical Analysis: Descriptive statistics were estimated for the relevant variables using analysis of variance (ANOVA). The hypothesis tests were conducted at the 0.05 level of significance. SPSS 26 v. for IOS was used for this purpose.

Table 2 Relationship between age and size of the periapical lesions.

Table 3 Distribution of Periapical lesions by group of age.

Table 4 Differences between quality of root canal and Patient’s age.

The study consisted of a histopathologic analysis of apical lesions acquired through apical surgery. The histologic assessment was achieved with light microscopy. The common apical lesions of endodontic origin are apical abscess, granuloma, and cysts (Figures 1-3). All these apical lesions must be confirmed by histopathological analysis, Periapical abscess do not appear as periapical radiolucency unless it develops over existing chronic periapical lesion [26]. The microbes are the principal etiological cause of initial apical periodontitis [3,27]. The valued goal of management of the disease was complete removal of the intraradicular infection and prevention of reinfection. 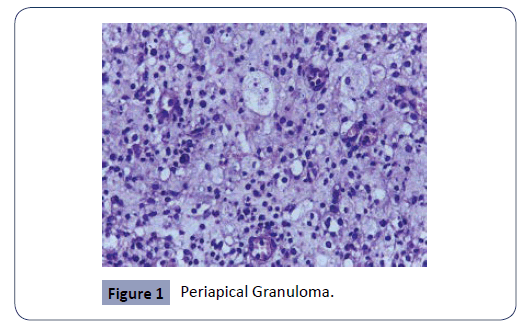 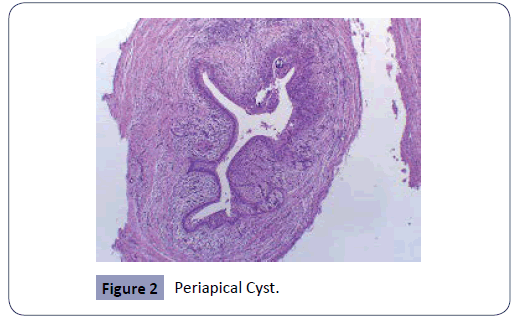 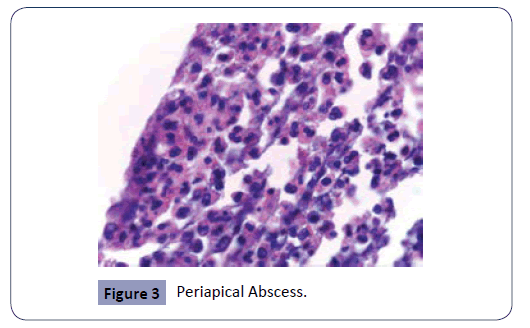 Pellegrino [28] demonstrated that patients with post-treatment apical had options, including nonsurgical or surgical management, intended to heal and preserve the affected tooth. Matsumato and others [29] described a good prognosis for small apical lesions. Sjögren et al [30] found no significant changes in the healing rate between lesions originally larger or smaller than 5 mm. We are in agreement with Sjögren because, in small apical lesions, less than five millimeters, the injury to the surrounding bone is less than in large lesions.

The prognosis for an apical lesion depends on its cause and radiographic dimension, and the final achievement of endodontic surgery is supported by numerous factors. These comprise the characteristics of the orthograde root canal filling, quantity of bone destruction, type of apical pathology, administration of antibiotics, and the method of preparing the apical root-end cavity [19,20].

A precise histopathological diagnosis was only achievable when the lesion was removed as a complete sample. According to Nair et al [6], this is possible because, in a usual report, the presence of an epithelialized lesion is reported as a radicular cyst. According to histopathological findings of the lesions observed, 93 cases of granuloma representing 72.65% were found while cysts (the second lesion observed) were 28 cases (21%), abscesses 6 cases (4%) and apical scars 1 case (0.78%). The granulomas removed with apical surgery were gradated, and most were obtained in fragmented tissue. Clinically, the teeth affected with this type of injury had mostly fistulas and remained asymptomatic.

The cysts as a whole were enucleated by apical surgery and reached 2 cm in diameter onwards. The abscesses were observed to be smaller compared to cysts, also fired fetid and pressure ejection of periapical fluids, and in their entirety accompanied by symptomatology. The apical scar was an x-ray finding obtained by grading apical tissue and remaining asymptomatic. However, the data observed in the statistical analysis do not show statistically significant values (p-0.601). The study confirmed that apical granuloma and cysts are the most predominant lesions of endodontic origin.

Author Jorge Paredes Vieyra declares that he has no conflict of interest.

Author Haydee Gomez Llanos Juarez declares that she has no conflict of interest.

Author Fabian OcampoAcosta declares that he has no conflict of interest.

Author Alan Hidalgo Vargas declares that he has no conflict of interest.

Funding: The work was supported by the Department of Oral & Maxillofacial Surgery, Special Dental Care and Orthodontics of Erasmus Medical Centre in Rotterdam, the Netherlands.

Ethical approval: This article does not contain any studies with human participants or animals performed by any of the authors. /All applicable international, national, and/or institutional guidelines for the care and use of animals were followed. /All procedures performed in studies involving human participants were in accordance with the ethical standards of the institutional and/or national research committee and with the 1964 Helsinki declaration and its later amendments or comparable ethical standards.

Informed consent: For this type of study, formal consent is not required. /Informed consent was obtained from all individual participants included in the study.