1Faculty of Nursing, National and Kapodistrian University of Athens, Greece

Background: Patients with chronic viral hepatitis are at high risk of developing hepatocellular carcinoma (HCC). Various predisposing factors have been described for the occurrence of HCC in these patients. The aim of the present study was to identify these risk factors. Method and Material: A retrospective descriptive epidemiological study, of 549 patients with chronic viral hepatitis was conducted. Patients were examined from January 1st 2007 to September 31st 2013 at the Hepatology outpatient unit of a General Hospital of Athens-Greece. Demographic, clinical characteristics of patients and laboratory test results were gathered from the registry of the outpatient unit. Statistical analysis was performed with the PASW18 software, using Pearson’s chisquare test. P values of less than 0.05 were considered significant. Results: Files of 549 examined patients in the outpatient unit were reviewed and 253 (46.1%) were diagnosed with chronic hepatitis B (CHB) and 296 (53.9%) with chronic hepatitis C (CHC). The majority of patients (57.2%) were men and less than 65 years old (87.4%). The frequency of HCC was 4.4% (24 patients). Fifteen patients were diagnosed with CHB and 9 with CHC (P=0.039). The factors found to be associated with the development of HCC in our study were age ≥ 65 years (P<0.001), diabetes mellitus (P=0.003), chronicity (≥ 10 years) of viral infection (P=0.007) and liver cirrhosis (P<0.001). Conclusions: The prevalence of HCC was significantly higher in patients with CHB compared with CHC patients. Age ≥ 65 years, diabetes mellitus, chronicity of viral infection and liver cirrhosis were the main predisposing factors for the occurrence of HCC. The early diagnosis of diabetes and the early treatment of viral hepatitis could contribute to the prevention of HCC.

Chronic viral hepatitis is a major health problem worldwide. It is a chronic inflammation of the liver parenchyma caused by hepatitis B virus (HBV) or hepatitis C virus (HCV). Almost two billion people are infected with HBV worldwide, while the number of virus vectors is estimated at over 360 million. Infection with HBV is the tenth leading cause of death worldwide and causes more than 600,000 deaths each year [1]. Prevalence of chronic HBV infection in Greece ranges from 0.41% to 0.85% in voluntary blood donors and reaches 22% in immigrants from Albania [2].

It is also estimated that 170-200 million people worldwide are infected with HCV, while each year 3-4 million people are newly diagnosed while HCV is responsible for 350,000 deaths per year [3] In Greece the exact prevalence of HCV infection is unknown and it is believed that 2% of the general population suffers from chronic HCV infection, with a geographical distribution of 0.5% to 7.5%. [4].

Chronic viral hepatitis is a major causative factor for the development of hepatocellular carcinoma (HCC), the fifth most common cancer worldwide and the second most common cause of death from neoplasmic disease. Specifically, each year 250,000 to 1,000,000 deaths are caused by HCC worldwide [5]. Chronic hepatitis B (CHB) accounts for 50% of all HCC cases and chronic hepatitis C (CHC) for 25% of them [6]. Literature suggests that male subjects, chronic alcohol consumption, obesity, and diabetes mellitus (DM) are among the main predisposing factors of HCC [7-20].

In a country with poor epidemiological registry, the purpose of the present study was to estimate the frequency of HCC in patients with chronic viral hepatitis, and separately in patients with CHB and in those with CHC. Also, we attempted to highlight the predisposing factors of HCC in these patients. The importance of this study lies in the fact that in Greece there are significant deficits in epidemiological data that will allow the design and implementation of a long-term strategy to prevent HCC, especially in patients with chronic viral hepatitis.

A retrospective descriptive epidemiological study was conducted. The inclusion criteria were: age ≥ 18 years old and certified diagnosis of infection (detection of antibodies against HBV or HCV, determination of HBV-DNA or HCV-RNA). Patients with HBV/HCV co-infection and/or co-infection with the human immunodeficiency virus (HIV) were excluded from the study, because in those patients it is difficult to correlate the development of hepatocellular carcinoma with the presence of HBV or HCV.

Our study population consisted of 574 patients with chronic viral hepatitis (CHB or CHC), who were examined over a seven year period (from 1 January 2007 to 31 September 2013) in the Hepatology outpatient unit of a General Hospital of Athens - Greece. Five hundred and forty nine out of 574 (95.6%) patients met the inclusion criteria and constituted our final study sample.

The present study was approved by the medical ethics committee of the hospital. The study complied with all ethical principles set by the Declaration of Helsinki. The methods of the study were restricted to recording and analysing patient data related to our study aim.

All variables were categorical and are presented as absolute and relative frequencies. After descriptive statistical analysis, followed bivariate statistical analysis (Pearson’s chi-square test) to identify the differences between categorical variables and the presence of HCC. P values of less than 0.05 were considered significant. Analysis was performed using the PASW Statistics software. 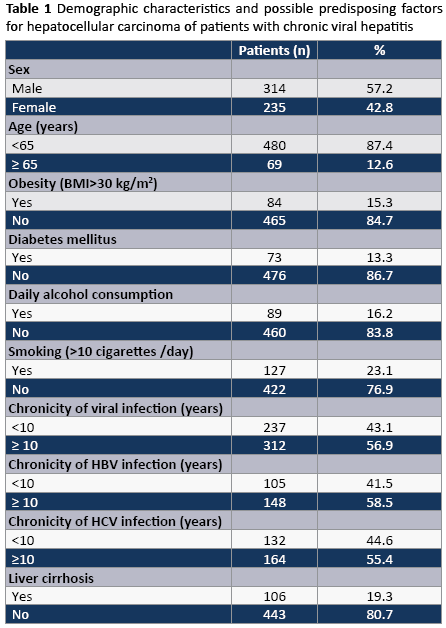 Table 2 summarizes the results of the statistical bivariate analysis between variables of Table 1 (independent variables) and the occurrence of HCC to patients of the study. HCC found to be more frequent in patients with age ≥ 65 years (P<0.001), patients with diabetes mellitus (P=0.003), those with chronicity of viral infection ≥ 10 years (P=0.007) and those with liver cirrhosis (P<0.001). Also HCC was more frequent in males, obese patients (BMI>30 kg/m2), those with daily alcohol consumption and the cigarette smokers, but not with statistical significancy. 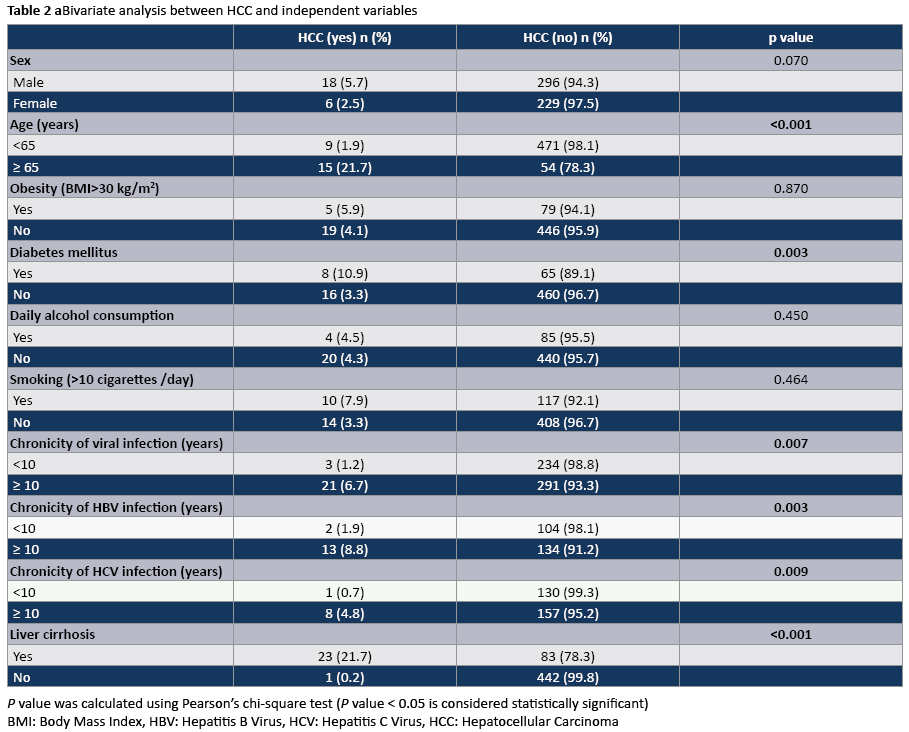 HCC is a major health problem worldwide. The relationship of chronic viral hepatitis with the pathophysiology of HCC is well known. However, according to the international literature, there are factors other than the infection by HBV and HCV, which have been associated with the occurrence of HCC [7,20]. Our study was conducted in order to detect these factors. We found that age ≥ 65 years, presence of DM, chronicity (≥ 10 years) of infection and liver cirrhosis were associated with the occurrence of HCC in patients with chronic viral hepatitis.

In addition, our data analysis confirmed the significantly higher prevalence of HCC among CHB patients compared to patients suffered from CHC. This association indicates the strong mutagenic activity of HBV in the liver. HBV is a DNA-virus, whose genome is combined with DNA of hepatic cells during the long stay of the virus in liver parenchyma, leading to various mutations in the genetic material of infected hepatic cells [21,22]. Moreover, the perinatal transmission of HBV is more common than that of HCV, resulting in the existence of HBV on liver parenchyma for more years [22]. In our study, this finding was verified, and a higher proportion of CHB patients had the disease for more than ten years than those who suffered from CHC (58.5% vs. 55.4%).

The age of patients proved to be a strong predisposing factor for the development of HCC in the present study. This obviously relates with the greater length of time the virus (HBV or HCV) stays inside liver parenchyma in people older than 65 years against younger individuals. As highlighted by Walter et al., [7] in their study the incidence of HCC is significantly increasing over the years, with a higher incidence between the ages of 60-70 years.

Moreover, El-Serag et al., [15] indicated a strong association between DM and HCC, regardless of the existence of other predisposing factors. A meta-analysis by Yang et al., [16] suggested that individuals with DM not only suffer frequently from HCC, but they have a higher mortality from HCC, compared with individuals who do not have DM. Wang et al. [19] in a systematic review and meta-analysis found a high prevalence of HCC in individuals with DM and also indicated the effect of antidiabetic medication in the development of HCC. More specifically, they found that metformin has a potential protective action while the sulphonylureas and insulin associated with the occurrence of HCC. In contrast, Singh et al., [17] found no relationship between antidiabetic agents and the occurrence of HCC.

Chronicity of viral infection by HBV or HCV was another predisposing factor for the development of HCC in patients of this study. For both total population and subpopulations of patients with CHB and CHC, patients with known infection for more than ten years had a higher prevalence of HCC, compared with those who have the disease for less than ten years. As in the case of the older age (≥ 65 years), HB and HC viruses causes significant damage to the liver parenchyma over the years, which may gradually lead to the development of HCC. It is well known that liver carcinogenesis in individuals with chronic viral hepatitis requires long stay of viruses in liver parenchyma [22].

Finally, in contrary to the findings of our study chronic alcohol consumption has been strongly associated with the occurrence of HCC [7,10,14]. In addition, several studies have highlighted the causal relationship between smoking and HCC [25-27].

Our study included only patients with chronic viral hepatitis who were examined at a single Hepatology outpatient unit of a General Hospital of Athens-Greece. The sample size (n=549) was rather small for a period of 7 years and does not allow us to generalize the results of this study to the general population of Greece. Also, our study was retrospective and based on the records of one Hepatology outpatient unit in Athens. We recommend the future conduction of a prospective multicenter study, which will allow the collection of data from a larger population. The data collection from many centers, some of them out of Athens, will allow the generalization of study results for the Greek population.

This study was conducted in a population of patients with chronic viral hepatitis, aiming to indicate the prevalence of HCC among them and to highlight the predisposing factors for HCC. Age ≥ 65 years, DM, chronicity of infection and liver cirrhosis are the main predisposing factors of HCC in these patients. The health professionals, who are involved in the prevention of HCC, should consider these factors. Early diagnosis of DM and the successful regulation of blood glucose levels, mainly through non-medication measures could contribute on reducing the incidence of HCC. Also, both early diagnosis of viral hepatitis and the application of appropriate therapy could reduce the long-term effect of virus on liver parenchyma, which causes the generation of HCC.