Introduction: Intravenous administration of metallic mercury (Hg) is a rare occurance that is usually reported in association with suicide attempts, with accidental injection, and with attempt of drug addicts to develope new ways to become intoxicated. Aim: The report of a new rare incident of intravenous administration of metallic Hg that was hospitalised in Intensive Care Unit of a General Greek Hospital. Material/Method: The presentation of a 22 years old female, with no medical history, that was admitted in a greek hospital after intravenous self- injection of metallic Hg. Results: The patient, primarly occured tightness in the precordial region, followed by burning pain in the chest, without respiratory distress. During the first hours of the threatment, the patient was awake and completely oriented to stimuli from the environment (GCS:15). Few hours later, she presented gradually descreased level of consciousness, followed by tremor (GCS:9). The patient started oral chelation therapy with the chelating agent DMSA/ succimer 800mg x3. After 2 hours, from the first dose of the chelating agent, the improvement of her consciousness level was remarkable. She was fully awake and had full communication with the environment. Blood and urine mercury levels were toxic. Radiographic examinations revealed multiple, tiny, metallic Hg emboli in patient's functional organs. Conclusions: Owing to the apparent rarity of the phenomenon, the immediate and long term health effects are uncertain and inconclusive. Chelation therapy is considered necessary.Prolonged monitoring of the patient's clinical status is required to prevent early and late reactions of acute or/and chronic Hg intoxication.

In recent years, the risks to humans and the environment from mercury exposure have been recognised. The World Health Organization, The Agency for Toxic Substances and Disease Registry, the United Nations Environment Programme, have determined that mercury and it's compounds are considered highly toxic to humans, as high exposure can lead to death [1,2].

The mercury toxicity to humans, depends on the chemical structure, the amount absorbed, the route of exposure and the general health of the person exposed [3].

There are several reports in the literature concerning mercury intoxication and its health effects. In most cases, the reported clinical manifestations of metallic mercury exposure, are described by inhalation of mercury vapors: The most commonly reported respiratory symptoms include cough, dyspnea which can progress to pulmonary edema or fibrosis, and tightness or burning pains in the chest. Gastrointestinal effects observed include, abdominal pains, nausea and/or vomiting, diarrhea and stomatitis. Increases in heart rate and blood pressure have been reported [4].

Intravenous administration of metallic Hg is a rare occurance that is usually reported in association with suicide attempts, with accidental injection, and with the attempts of drug addicts to develope new ways to become intoxicated.

Whereas in Greece, according to the Poison Information Centre data, no cases were reported till 2012 [Figure 1]. 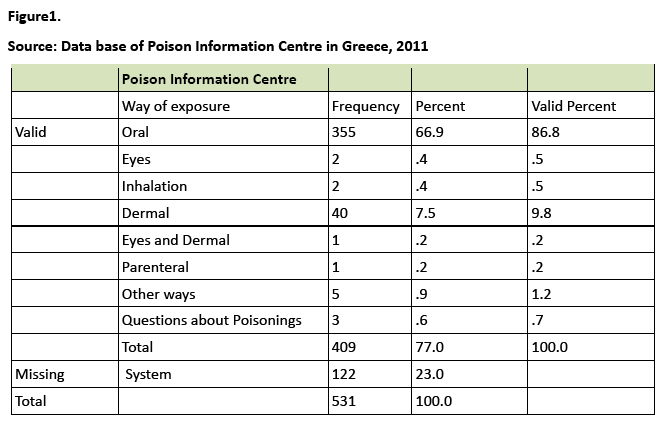 Figure 1: Source: Data base of Poison Information Centre in Greece, 2011

Here in, we report a new case report of the intravenous administration of metallic mercury. The patient was hospitalised in the Intensive Care Unit of a General Greek Hospital.

Description of the Case

We present the case of a 22 years old female patient, with no medical history, that was admitted to the hospital after the self injection of intravenous metallic mercury.

The metallic mercury had been taken from three broken thermometers in an attempt at suicide. The information was obtained from the patient.

The patient was brought to the Emergency Room by her relatives two hours after the self injection.

The Physical examination that took place in the Emergency Room, revealed normal consciousness level, with a GCS:15.

Despite complaining of a tightness in the precordial region, followed by burning pain in the chest, without respiratory distress, her vital signs were as follows: Blood pressure of 120/60mmHg, Heart Rate of 90/min, Temperature of 36.6°C and a Respiratory Rate of 17/min.

The electrocardiogram showed normal sinus rhythm, without other pathological findings. The patient was transported to the Intensive Care Unit for continuing observation and monitoring.

From the laboratory tests, no pathological findings were found.

During the first hours following admission, the patient was awake and completely oriented to stimuli from the environment, with a GCS:15. A few hours later, she presented with a gradually descreasing level of consciousness, followed by tremor, with a GCS:9 (Verbal Response= Incomprehensible Speech: 2, Eye Response Opening= to response to pain: 2, Motor Response= Localizing response to pain: 5).

A nasogastric tube was inserted and the patient started oral chelation therapy with the chelating agent DMSA – Dimecaptosuccinic acid/ succimer 800mg every 8 hours, as was recommended by the Local Poison Information Centre, based on patient's weight.

Two hours after the first dose of the chelating agent, she showed a marked improvement in her level of consciousness. She was fully awake and oriented to time and place.

Subsequent radiografic examinations: CT scan of the chest, showed significant volumes of radiopaque foreingn bodies, (deposits of mercury), predominately in the lower and posterior lung fields. A small pleural effusion was observed. No intracardiac and pericardial mercury deposits were detectable. An abdomen CT scan demonstrated similar multiple small spherical opacities of metallic density in the liver, in the right kidney, and in the region of the spleen and the paraspinal muscles. Whereas brain CT scan was found to be normal.

Radiological examination of the forearm, revealed small concentrations of metallic mercury at the injection site, but without the presence of localised inflammation [Figure 3]. 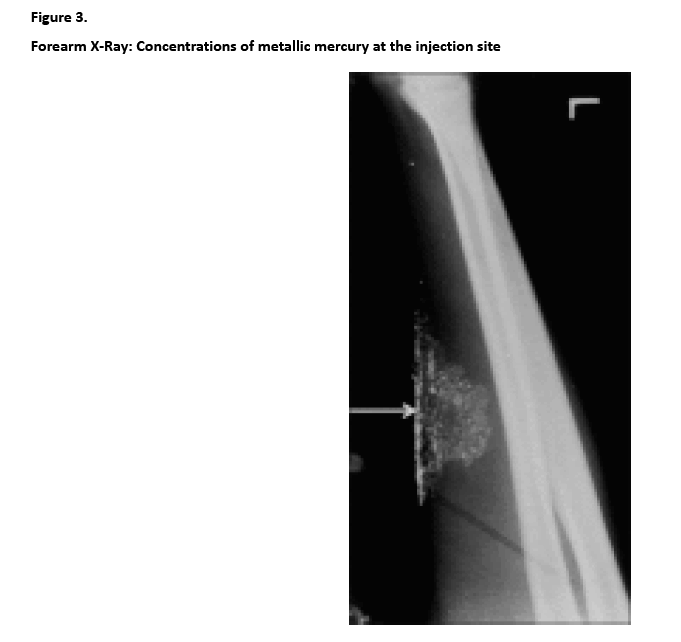 The patient completed the first 7- day cycle of DMSA/ succimer (800mg x3) therapy and was eventually discharged from the ICU in excellent condition.

It was recommended to continue the second 14- day cycle of DMSA/ succimer (800mg x2) on her transfer to the medical ward.

A psychiatric assessment was also recommended and further follow up of blood and urine mercury levels, in order to rule out the possibility of chronic mercury toxicity.

Μetallic mercury, when injected intravenously, can cause a variety presentations: from a total lack of symptoms, [19] to respiratory failure, kidney damage, liver damage, neurologic symptoms, [20] and even death. Μurray and Hedgepeth [21] and De Palma et al., [22] reported the death of two patients caused by acute renal and hepatic failure, and Acute Respiratory Distress Syndrom.

Our patient, made a full clinical recovery and did not show any renal, hepatic, or pulmonary sequelae. Our observation is most in concordance with that of Bruce et al., [20] who described a patient with a gradually descreasing level of consciousness, without any other symptoms of mercury toxicity. It is important to emphasize, that it is the only case reported with this particular clinical picture.

The most common respiratory manifestations reported, are dyspnea and tightness in the chest, [20,23-25] as was found in our case.

In the present case, as in many others, alterations in liver, kidney and lung function were absent, although considerable amounts of mercury could be detected.

Radiographic examinations of most cases, describe multiple tiny metallic mercury deposits in functional organs, [20,23,26-30] as in our patient.

The usage of chelation agents in the treatment of mercury exposure is recommended. Although, in cases of intravenous exposure, its use is controversial [25,31] In the present case, the chelation theraphy with DMSA/ succimer was considered necessary.

Owing to the apparent rarity of the phenomenon, the immediate and long term health effects are uncertain and inconclusive.

Intravenous administration of metallic Hg is considered as an emergency condition that can cause widely varying presentations from a total lack of symptoms to respiratory failure, kindey damage, liver damage, neurological symptoms and even death. Chelation therapy is considered necessary.