Background: Globally, unsafe abortion is a public health problem, which accounts approximately 20 million each year, resulting nearly 80,000 maternal deaths and hundreds of disabilities and the problem is more severe in developing countries. In Africa the risks of dying from unsafe abortion is one in hundred fifty, and unsafe abortion accounts for up to 25-35% of maternal deaths in Ethiopia being a critical public health problem with possible complication like hemorrhage, sepsis, incomplete abortion and damage to internal organs.

Conclusion and recommendation: Majority of the respondents’ who practiced induce abortion 16(8.8%) were under 20 years of age and of those who induce abortion, most 15.9% were by traditional healer and themselves, so health professionals should give health education at school and community level.

Abortion is the termination of a pregnancy by the expulsion of a fetus or embryo from the uterus. An abortion can occur spontaneously due to complications during pregnancy or can be induced. Abortions are categorized as safe or unsafe using World Health Organization definitions (WHO). WHO defines unsafe abortion as a procedure meant to terminate an unintended pregnancy that is performed by individuals without the necessary skills, or in an environment that does not conform to the minimum medical standards, or both. In the context of human pregnancies, an abortion induced to preserve the health of the pregnant female is termed as therapeutic abortion, while an abortion induced for any other reason is termed as elective abortion. By convention, induced abortion is usually defined as pregnancy termination prior to 20 weeks or less than 500-gm birth weight(for developed countries) and 28 weeks gestation or less than 1000-gm birth weight (for developing countries, like Ethiopia) [1,2].

Deliberate terminations of pregnancy have been traced back to ancient times. There are evidences to suggest that historically ,pregnancy where terminated through a number of methods including administration of aborting agent, herbs, the use of sharpened implement, application of abdominal pressure and other techniques [3].

In Ethiopia, abortion has been contributing to the high maternal mortality rate (MMR). The risk groups, (mothers and children) have priority in health service implementation. Worldwide, the plan to achieve the Millennium Development Goal 5 is focusing on maternal and child health as a primary goal in health program. To achieve the MDG 5 of reducing maternal deaths by three-fourths by 2015, particularly in sub-Saharan Africa, like Ethiopia, the issue of abortion has to be systematically addressed [4].

The demand for abortion in this poor and predominantly rural country is rooted in low contraceptive use and high levels of unintended pregnancy. Indeed, only 14% of Ethiopian women of reproductive age use contraception and more than 40% of pregnancies are unintended. Expansion of contraceptive services is crucial if unintended pregnancy and abortion-related mortality and morbidity are to be reduced. The main causes of death from unsafe abortion are hemorrhage, infection, sepsis, genital trauma, and necrotic bowel. Poor wound healing, infertility, consequences of internal organ injury (urinary and stool incontinence from vesico-vaginal or recto-vaginal fistulas), and bowel resections are not ignored. It is also one of the most easily preventable and treatable [5,6].

Adolescence course is a time of transition from childhood to adulthood where new behaviors are learned more easily, in Ethiopia history adolescent and young people ages 10-24 are the largest group ever to be entering adulthood most of them are facing reproductive health problem one of which is unsafe abortion. Limited knowledge of sexual psychology, early marriage, limited use of contraceptive, limited access to reproductive health information and education over their sex life, all contribute to high rate of pregnancy for which abortion done in unsafe condition [7]. Unsafe abortion may be induced by the women herself, by non medical persons or by health workers in unhygienic conditions, such abortions may be induced by insertion of a solid object (usually root, ting or catheter) into the uterus in improperly performed dilation and curettage procedure, ingestion of harmful substances or external force. The mortality and morbidity risks of induced abortion depend on the facilities and skill of the abortion provider methods used and certain characteristics of the women herself such as general presence of reproductive tract infections, STI, age parity and stage of the pregnancy. The risks involved also depend on the availability and the utilization of treatment facilities once complication has occurred [8].

Worldwide approximately 20 million unsafe abortions performed each year, resulting nearly 80,000 maternal deaths and hundreds of disabilities. In Africa the risks of dying after unsafe abortion is one in hundred fifty. Several studies indicated that unsafe abortion accounts for up to 25-35% of maternal deaths in Ethiopia being a critical public health problem with possible complication like hemorrhage, sepsis, incomplete abortion and damage to internal organs [9].

Legality of abortion and cooperation with NGOs are some of the country’s health activities to reduce maternal mortality. Marie Stops International (MSI) is one of the most dynamic NGO works to reduce the number of unsafe abortions globally by rapidly expanding access to comprehensive sexual and reproductive health services, including safe abortion and post abortion care [10]. Hence, the importance of doing this research is to be used as a base line by policy makers, public health planners and administrators and significant others to explore the way to reduce risks of unsafe abortion and prevention.

An institutional based cross sectional study was conducted from April 1-12, 2013 at Goba town.

The sample size were determine using single population proportion formula by assuming proportions of female student in Batu Terara preparatory school Goba town who are aware of unsafe abortion to be 50%, 5% marginal error and 95% confidence interval. By considering 10% contingency for non-respondent the finale sample size were 196.

Data were collected by using closed ended questionnaires and prepared in English language, which were held with a method of self administered data collection tool.

To ensure the quality of data the pre test were given on Robe preparatory school female students for 30 students one week prior to the time of data collection. There were immediately data checking data for their completeness and clarity.

After the data collection, each questionnaire was checked for its completeness. Data cleaning and editing as well as coding were done. The data was analyzed using SPSS version 16. To ascertain the level of female preparatory students’ knowledge about unsafe abortion, 8 knowledge assessment questions were provided for those respondents who have heard about unsafe abortion. To obtain the summarized extent of knowledge of female students of Batu Terara preparatory students each knowledge assessment question response were recorded into the value ‘1’ for correct answers and the value ‘0’ for the incorrect answers in the first place. Then respondents’ correct responses to the questions were aggregated. And based on the cumulated correct responses score, the study subjects were classified as not knowledgeable and knowledgeable about unsafe abortion. On the same hand, the level of attitude and practice were ascertained on the same manner. 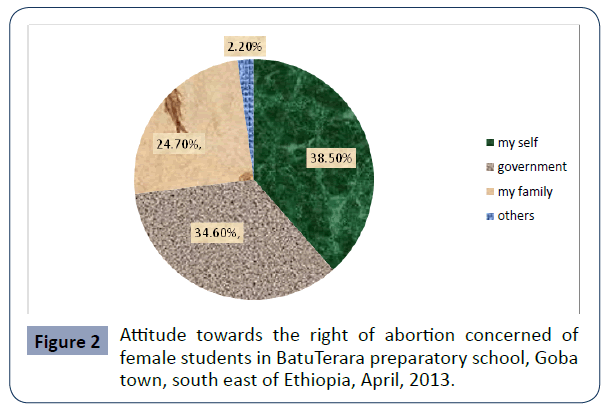 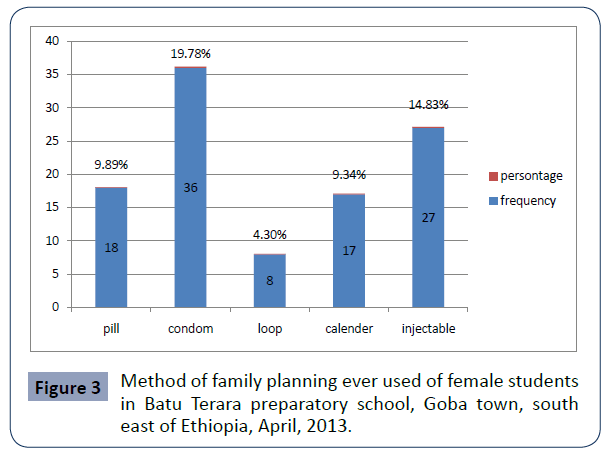 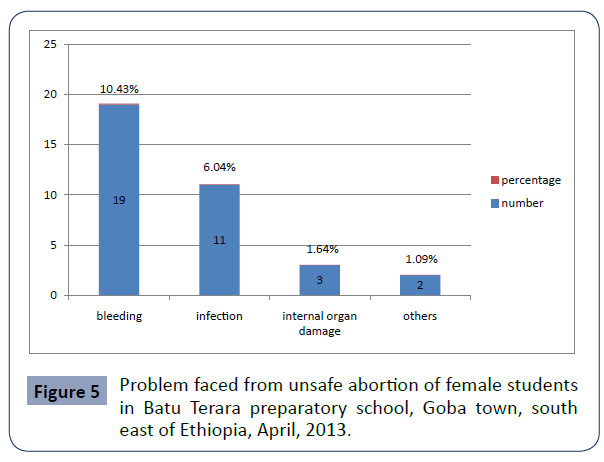 The aim of this study was to assess KAP on unsafe abortion among female students in BatuTerara preparatory school. Lack of awareness about prevention of unintended pregnancy and negative attitude towards unsafe abortion contribute the main reason for increment of unsafe abortion. A study of this type is therefore, found to be very important. The result of this study shows that 15(7.13%) were practiced by traditional healer and themselves from those experienced abortion, which increases the likely hood of unsafe abortion. Unsafe abortion showed an exaggerated in developing countries [11]. This could be due to high level of family criticism and economic problem to have safe abortion. In this study 22(12.08%) were practiced abortion of those 16(8.79%) were less than 20 years of age which is less than from the data showed in 2003 for the developing country for the same age which was 14% [3]. This could be due to the availability of private health care providers in these commercial centers draws women from surrounding areas. This study reveals among the total of 19(10.4%) who induce abortion 8(5.5%) were performed in health institutions [12-18]. In 2008, 27% of induced abortions were safe procedures performed in health facilities [19]. This could be due to improve level of knowledge and attitude towards health institutions to practice induced abortion. The result of this study showed among the total of 22 students who practiced abortion, 19(10.43%) and 11(6.04%) were faced bleeding and infection respectively. Whereas, study conducted on abortion at Jimma hospital 2008 shows that among the total of 80 patients with diagnosis of induced abortion 50(62.5%) were admitted for bleeding and infection [16]. Even if it is still low as compared to the study shown in Jimma, it could be due to difference in the study design. The result of this study shows about 13(7.14%) were due to economic problem and 14(7.69%) were due to fear of family criticism which showed the highest proportion. the same study revealed that 18(22.5%) of the case gave economic problem as the main reason for abortion [20].

The study showed that 108(59.34%) were knowledgeable and the rest 74(40.6%) were not. From total of respondents 85(47.8%) had good attitude and the rest 97(52.2%) had not good attitude. Majority of the respondents who practiced induced abortion 16(8.79%) were under 20 years of age and the reason to induce abortion 27(14.83%) were due fear of family criticism and economic problem as well 15(8.24%) were performed induced abortion by traditional healers and themselves. The major toll of complication faced during abortion were bleeding 19(10.4%) which accounts the highest rank, while infection were the second leading which were 11(6.04%) and the rest includes internal organ damage 3(1.64%).

The authors declare that they have no any competing interests.

All authors have contribution to the manuscript; all authors read and approved the final manuscript.

We are grateful to Madda Walabu University for supporting this study. We are also very grateful to data collectors and study participants to undertake this study.