Background: Immune-checkpoint-inhibitors (ICPIs) represent a novel class of immunotherapy against several malignancies that changed the treatment of cancer and improved the patient’s outcome. However these agents are associated with several "immune-mediated" adverse effects, of which, acute kidney injury (AKI) is quite rare.

Case report: A 58-year old patient diagnosed with advanced NOS/NSCLC, and not receiving any other medication, experienced a decline in the renal function after four cycles with nivolumab. After ruling out other common causes of interstitial nephritis, was attributed as a cause of interstitial nephritis, confirmed by the renal biopsy. The patient discontinued immunotherapy and he was treated with intravenous prednisolone. There was a slight decrease in creatinine values and he continued treatment at home. Two months later creatinine values had returned to normal, but unfortunately, the patient died from an acute heart attack.

Conclusions: AKI is a possible but rare complication of immunotherapy which may require discontinuation of ICPIs and corticosteroid treatment. mp3download.link Best YouTube to MP3 converter. Download MP3 from YouTube for Free. one would honestly have expected more on the track Youtube to mp3 Download Mp3 songs for free Given the legendary pedigree of the man behind the sound downloadmp3-gratis.biz Download mp3 songs online at Mp3 Converter, watch high quality online music videos download-mp3gratis.me watch and download free songs of the highest quality. Listen to songs online here comfortably without any annoying advertisements. metrolagu.site Easy to use and free MP3 downloader. YouTube To MP3 download in seconds using the best YouTube to MP3 converter. YouTube To Mp3 Get the latest song by simply typing the latest artist or song title in the Search menu. Mp3 file format with 128 - 320 Kbps bitrate converted from YouTube videos. read at this blog All those artist performances are still available on YouTube today find more here

Novel anticancer therapies include immune check point inhibitors anti-programmed cell death protein-1 (PD-1), anti-programmed death ligand-1 (PD-L1) and cytotoxic T lymphocyte-associated antigen 4 (CTLA-4) drugs. The recent emergence of immune check point inhibitors (ICPIs), represents an emerging class of immunotherapy used in treating malignant solid tumors and hematologic malignancies and they recommend a substantial advance in oncology. These drugs have recently been approved for use in many advanced malignant neoplasms, mainly in nonsmall cell lung cancer (NSCLC), melanoma, renal-cell carcinoma, Hodgkin lymphoma, and many other malignancies. ICPIs are monoclonal antibodies that target inhibitory receptors expressed on T cells, other immune cells, and tumor cells. CTLA-4 prevents T cell activation by outcompeting CD28 for its ligand, B7, there by inhibiting T cell co-stimulation, whereas PD-1 down-regulates effector T cell function by engaging its 2 ligands, PD-L1 and PDL2. The most common side effects include rash, colitis, hepatitis, and hypophysitis [1,2]. Sparse case reports have described acute kidney injury (AKI) related to ICPIs. The most common pathology finding adverse effect from the kidney, is acute interstitial nephritis (AIN). Generally there are no diagnostic criteria are available to distinguish AIN associated with anti-PD-1 therapy from other AINs [3].

The aim of this study was to present one case of AKI in patient with NSCLC who received anti-PD-1 treatment, displaying evidence of AIN on kidney biopsy.

A 58-year-old man was diagnosed with NOS/NSCLC and brain metastases, on the 9th/2017. Initially, the patient developed instability, inability to focus, mouth angle deviation and left hemiparesis. Imaging revealed secondary brain lesions, mass in the upper and middle lobe of the right lung in adhesion to the pericardium and pleura, as well as extensive intrathoracic lymphadenopathy. The patient who had no other diseases (diabetes mellitus, arterial hypertension, cardiac insufficiency) and was not taking any other medicine for any reason, underwent a craniotomy, surgical exclusion of the lesion and then whole brain radiation therapy (SD: 30Gy-fractionated stereotactic, boost in the area of major disease 37.5Gy). At the same time, he started chemotherapy with cisplatin, docetaxel with good tolerance and response. On the 2nd/2018, the imaging reexamination showed a partial remission of the disease, with the disappearance of the brain lesions and a reduction of >50% of the intrathoracic ones. However, the patient, for personal reasons, decided to discontinue the treatment. On the June 2018 new lesions in the right temporal lobe 2x2cm and in the right middle pulmonary lobe were documented. Molecular tumor profile, showed high expression of PD-L1 (85%), and the patient received 2nd line treatment with nivolumab 240 mg/2 weeks (first course on June 15th). All the laboratory examinations were in normal limits (serum creatinine 0.8 mg%, Na+ 135meq/l). After 3 cycles of immunotherapy (1/8/2018), there were increased creatinine levels (1.7mg%) and decreased serum sodium levels (126meq/l), without any related symptoms. ACTH=34-58pg/ml, free serum cortisol 17.2-22.1 μg/dl, FSH=25 mUI/ml, prolactin 14.7 ng/ml, T3=125.8ng/dl, free T4=1.4 ng/dl, TSH=2.53μU/ml, anti TPO=22.1 IU/ml, serum testosterone=380 ng/ml. Treatment was postponed for 15 days, and then (17/8/2018), the patient received the 4th course of nivolumab. Serum creatinine was 1mg% and sodium 138 meq/l. Ten days later, and 73 days from the initiation of nivolumab, the new tests revealed further renal function deterioration (creatinine: 2.8-3.9 mg%, urea: 101-156 mg%). Serum sodium ≈ 128 meq/l. Echo ultrasound showed kidneys with normal thickness and dimensions with small dilation of the left pyelocaliceal system. Dynamic renal scanning was consistent with satisfactory radiopharmaceutical intake during renal perfusion and prolongation of parenchymal phase indicative of acute renal failure. Further control of pituitary gland, autoantibodies, cortisol/ACTH levels, was normal. The patient underwent a kidney biopsy due to non-improvement of renal function and the histology revealed swelling and clear cell vacuolation of tubular epithelium, dilation of the tubular lumina with casts and mild edema of the interstitial tissue with normal glomeruli (Figures 1 & 2), findings absolutely compatible with Acute Tubulointerstitial Nephritis (ATIN) of pharmacological etiology. As the patient was not receiving any other medication, and the creatinine was increasing with the re-administration of immunotherapy, the ATIN was strongly attributed to immunotherapy. Thus, nivolumab was discontinued and the patient treated with IV corticosteroids (prednisone 1 mg/Kg), with a gradual decrease in creatinine (30/10/2018: 2.3 mg%), while the renal ultrasound remained without abnormal findings. Four weeks later (28/11/2018), creatinine value was in normal limits (1-1.4 mg%). Unfortunately, on 18/12/2018, the patient died at home, suddenly from an acute myocardial infarction, according to the assessment of the treating family doctor. 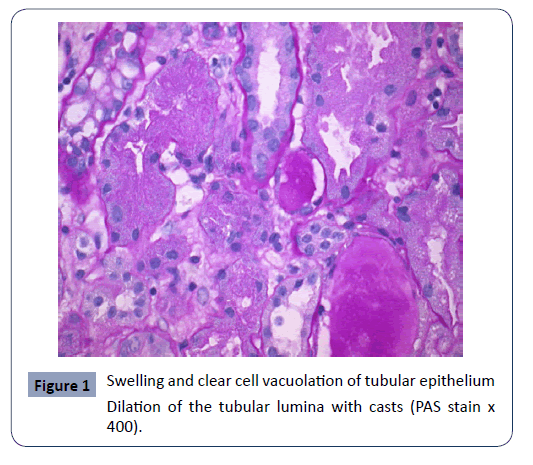 Nivolumab is a fully human IgG4 monoclonal antibody raised against PD-1. This cell surface receptor negatively controls T cell proliferation and functions, and is observed on activated T lymphocytes and T cells with chronic stimulation [4]. We report one case of AKI of grade 3 severity, biopsy-proven ATIN, among 244 (0.4%) patients with different types of primary solid malignant neoplasms (NSCLC, renal Ca, colon Ca, transitional cell bladder Ca, breast Ca, Small Cell Lung Cancer, Head and Neck Ca) exposed to nivolumab as a single treatment or in a part of combined treatment, in our Department between 6/2015 – 9/2020. The estimated incidence of any-grade AKI was 1 to 2% in patients treated with a single agent (nivolumab, pembrolizumab, ipilimumab) and approximately 5% in those, treated with the combination of nivolumab plus ipilimumab. The incidence of grade 3 or 4 AKI injury was less than 1% with single agents and 1.7% with the combination of nivolumab plus ipilimumab. Results recently published in 11.000 patients treated with randomized and non-randomized distribution, revealed that the relative risk of AIN from PD-1 and CTLA-4 inhibitions was lower: [1.86 (95% CI 0.95-3.6)] of that of non-nephrotoxic drugs: [4.2 (95% CI 1.6- 11.2)]. The usual time of onset of symptoms is 91 (21-245) days from the start of anti-PD-1 treatment, The median peak serum creatinine was 4.5 mg/dL [1,3,5].

In our case there was an interval between PD-1 inhibition and the first development of AIN of 46 days and 73 days of mild and severe AIN respectively, similar to previous reports and the upper limit of serum creatinine was 3.9 mg%. No eosinophilia or no other abnormal laboratory findings, except mild, asymptomatic, hyponatremia, without peripheral oedema, were noted. For hyponatremia, according to clinical and laboratory examinations, no other cause was demonstrated, except of drinking increasing amount of fluids.

In patients with AKI, histological findings are not specific. The differential diagnosis the cause of AIN is difficult, in cases of patients with other diseases (erythematosus lupus) or taking certain medicines [(nonsteroidal anti-inflammatory drugs (NSAIDs), beta-lactams, rifampin, allopurinol, vascular endothelial growth factor (VEGF), or proton pump inhibitors (PPIs)], which are well associated with the development of AIN and represents an immune reaction with an underlying cellular or humoral or idiosyncratic mechanism [3,5-7]. Immune interstitial nephritis could be explained by specific antibodies against drugs which may also recognize the tubular membrane filter or complement deposited in the kidney interstitial space [8].

Our patient underwent kidney biopsy and ATIN of pharmacological etiology was confirmed. The interesting in our case was that our patient was not receiving medications (mainly NSAIDs, VEGF, or PPIs, with known relations with the development of AIN. On the other hand, the patient was rechallenged with PD-1 inhibitor treatment after initial recovery of kidney function without steroid use. At this point we have to remind that nivolumab benefits would have been persistent with reintroduction of the drug is preferable and suggest than a wait-and-see management, of course if toxicity is not prohibitive.

Treatment lies in discontinuing anti-PD-1 therapy and initiating high-dose corticosteroids until renal clearance is normalized. According to many studies few patients required transient hemodialysis. The management of renal toxicities is summarized in the American Society of Clinical Oncology (ASCO) guidelines [9]. It seems that the response to glucocorticoids is better in patients with ATIN than with thrombotic microangiopathy [1,5]. We treated the patient with discontinuation of immunotherapy and cortisone administration. The result was the complete recovering of renal function in ≈ 90 days without further use of hemodialysis.

In summary and given the widespread use of immunotherapy in the treatment most of malignant solid tumors, knowledge of its rarer side effects, such as renal toxicity and timely treatment, may contribute to better patient outcome and improved quality of their life.