Background: Pediculosis capitis remains a significant health problem worldwide. Purpose: It was to record the preferred treatment options against pediculosis capitis in school–age children in Greece. Method and Material: A randomly selected, stratified sample of schools from all over Greece was used. A questionnaire with closed and open-type questions was used. Five thousand, eighty four questionnaires were distributed and 2792 returned. Descriptive statistics was conducted. Results: Median age of the children was 8 (3-13) years. 88,6% of the parents answered the would not visit a dermatologist in the case of pediculosis. Insecticides were the treatment of choice in most cases ( 80 %), while louse comb as a single treatment was preferred by 1 % of the parents. Conclusion: Drugs remain the main treatment choice in Greece. Dermatologists infrequently treat patients with pediculosis capitis.

Pediculosis capitis is more often in childhood [1,2]. Although drugs are the cornerstone of treatment, other chemicals and louse combs are used as well [3,4]. Dermatologists are the nominal experts in the management of head lice, yet many dermatologists infrequently treat patients with this condition. Other specialties and paramedical personnel are also engaged in the treatment of pediculosis capitis [5].

In order to estimate the prevalence of pediculosis capitis in Greece, to evaluate potential risk factors, and record treatment options in use, a large sample of schoolchildren coming from urban and rural areas was examined. Part of the data regarding treatment options and dermatologist involvement are presented.

The study lasted over two years (Sept 2006-Dec 2008). Approval was given by The Ministry of Education and the local ethical committees. A randomly selected, stratified sample of schools from all over Greece was used. Five thousand and eighty –four questionnaires were administered in nurseries primary public schools in urban, semi–urban and rural areas of a Greece. Attica (The city of Athens and suburbs, Oropos), Piraeus (Perama), Larissa (The largest town in central Greece), Thessaloniki (City and suburbs), Serres (Northern Greece) and islands (Aegean islands: Syros, Spetses, Kythira, Ionian islands: Corfu, Cephalonia) were included in the study. Closed and open-type questionnaires were used. Parents filled out one questionnaire per child in the home. A questionnaire with closed and open-type questions constructed by the researchers was used. Five thousand, eighty four questionnaires were distributed and 2792 were returned.

Descriptive statistics was conducted .The prevalence of pediculosis was estimated in terms of the percentage of children infected with lice during the response time of the questionnaire of this research. SPSS 17.0 was used.

The median age of the children included in this analysis was 8 years (3 to 13 years). Two hundred and forty four cases with pediculosis capitis were recorded among 2025 children who answered the question about current pediculosis, giving a prevalence of 12%. 88,6% of the parents answered the would not visit a dermatologist in the case of pediculosis (Table 1). Insecticides were the treatment of choice in most cases (80 %), while louse comb as a single treatment was preferred by 1% of the parents (fig 1). 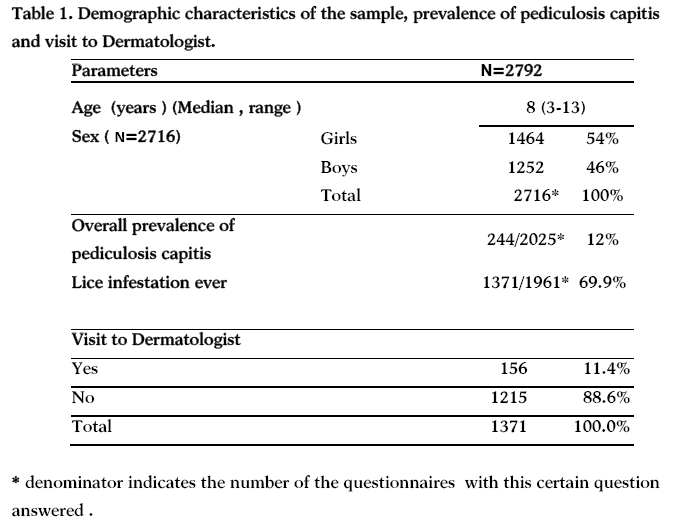 The overall infestation rate found in this study was rather high. However, similar results are reported elsewhere, even though percentages vary significantly among countries and studies. Mean worldwide prevalence is estimated at about 7 % , varying from 1 % to 60 %, depending on the sample6. Comparative evaluation of international data proves that pediculosis capitis is widely spread showing a increasing trend.6-9 It is generally low at 8-9 years old, increasing rapidly thereafter. Girls and women are at higher risk.

Even though the infestation rate of pediculosis is high worldwide, much of lice transmission and pediculosis epidemiology remain unclear and many methods for head lice removal have been developed. It has also been proposed that the differences of pediculosis among the schoolchildren could be explained by the different control strategies applied by parents or advisors to eradicate head lice [10].

Among the various eradication methods, drugs remain most popular. Indeed, according to the findings of the present study, drugs against pediculus capitis were the treatment of choice in most cases. Drugs efficacy is well documented, despite the reports of resistance to them, since mid-90’s [4,11]. Mechanical ways of lice removal are also used, combined with drug therapy or not. Repellant mixtures, shampoos and foams are also in use. In the study of Roberts et al, malathion was found to be more effective than comb alone in the treatment of pediculosis capitis, although severe methodological concerns were raised [12]. In another study, diligent screening and combing together with the adherence to the treatment protocol lead to lice eradication [13]. Despite criticism regarding parents’ skillfulness needed, combing efficacy combined with the absence of toxicity could be an important motive for parents to adopt it. In any case its contribution to lice tracing is beyond any doubt [14]. Despite dermatologists being the nominal experts in the field, other specialties or paramedical personnel is often engaged in the treatment of pediculosis, a finding similar to ours [5]. An intense campaign regarding regimes against lice and the role of dermatologist is necessary.

As response rate was low, the possibility of statistical error is high. Different results could have emerged, if participation was larger. Some geographical areas were underrepresented, due to bureaucratic and accessibility problems. Moreover, this was a questionnaire survey and lice were not observed by physical exam or by a medical professional.