Copyright: © 2018 Fikre R, et al. This is an open-access article distributed under the terms of the creative commons attribution license, which permits unrestricted use, distribution and reproduction in any medium, provided the original author and source are credited.

Background: Emergency obstetric and newborn care is a package of medical interventions averts 40% of intrapartum related maternal and neonatal deaths. This study aimed to assess provider’s knowledge and availability of emergency obstetrics and newborn care service in public facility of Gedeo zone, south Ethiopia 2017. Method: Institution based cross-sectional study was conducted from Septmber1-to October 30/ 2017. Simple random sampling was used to select 271 obstetric care providers. Medical supplies, infrastructure and record review were assessed at each facility. Descriptive statistics and logistic regression analyses were performed using SPSS version 20.0.Crude with adjusted odds ratio with 95% confidence interval at p-value< 0.05were computed to examine statistical significance. EmONC indicators were calculated by using standard United Nations guidelines Result: 47% of obstetric care providers had knowledge towards emergency obstetric and newborn care. Training with (AOR=4.32, 95% CI: 1.69, 11.86), being a midwives with (AOR=2. 52, 95% CI: 1.03-8.3) and work experience more than five years with (AOR=5.52, 95% CI: 1.05, 9.06) were positively associated with knowledge of obstetric care providers. One facility served as comprehensive CEmOC facility. The number of CEmOC facilities per 500,000 populations was 0.59 and the number of EmONC facilities per 500,000 populations was 6.8. Assisted vaginal delivery and management of pre-eclampsia were the most frequently missed signal functions. Conclusion: EmONC facility ratio was not adequate while CEmONC facility ratio met the minimum standard. Training, being a midwives and work experience was positively associated with provider’s knowledge.

Maternal mortality is a major health development challenge in Africa. Reducing maternal mortality has remained a daunting task despite the deployment of proven effective strategies such as the provision of access to Emergency Obstetric Care (EmONC) to pregnant women with direct obstetric complications in poor resource settings. It alone can avert 40% of intra-partum related neonatal deaths and a significant proportion of maternal mortality [5,6].

A EmONC facility is the one which set of seven key obstetric services, or “signal functions,” has been identified as critical to basic emergency obstetric and newborn care (EmONC): administration of Parenteral antibiotics; administration of parenteral anticonvulsants; administration of parenteral uterotonic, removal of retained products (manual vacuum aspiration); assisted vaginal delivery; manual removal of the placenta; and resuscitation of the newborn. CEmOC facility is the one which include blood transfusion and cesarean section in addition with the basic seven signal function [8].

The UN also recommends that there should be at least 5 EmONC facilities per 500,000 populations, of which at least one should provide all the signal functions of CEmOC [9,10]. However, just having adequate number of facilities does not necessarily ensure the availability of service. Actual functionality of any designated EmONC facility with the signal functions is important. In this study area, little study shows providers knowledge and the status of the service. Therefore, this study was undertaken to determine provider’s knowledge and provision of emergency obstetric and new born care service in public health facility of Gedeo zone south Ethiopia.

A cross-sectional study was conducted from September 1 to October 30/2017. Gedeo zone is located in south nation nationalities and people region (SNNPR) of Ethiopia. The city of the Zone is Dilla which is located 84 km from Hawassa city which is administrative city of SNNPR which lies 394 km South of Addis Ababa which is the capital city of Ethiopia. The altitude of Gedeo zone is 1765 m above sea level and 2007 census had a population of 847,434. A total of 39 public health facilities were found in the Gedeo Zone, on which 3 were hospital and 36 were health centers.

Inclusive criteria: Randomly selected obstetric care providers found in public health facility of Gedeo zone and who had service greater than 6 month were participated in the study.

Exclusive criteria: Obstetric care providers who have mental illness and seriously ill and cannot communicate during data collection period excluded from the study.

Knowledgeable: Obstetric care providers answer the knowledge question above or equal to mean.

Since, the source population was less than 10,000, correction factor was used to estimate the final sample size required.

A pre-tested and structured self-administered questionnaire was used for data collection. The survey questionnaire was collected using a standard check list that was adopted from WHO, UNICEF AND UNFPA emergency obstetric monitoring handbook. Pretest was done among (5% of total sample size) obstetric care providers from non-selected units by data collectors and principal investigators. Gaps identified during pretest readjusted accordingly. Then data were collected through interview and observation. To avoid biases during observation, all necessary precautions were taken. Observation tool were used to observe the overall readiness of the facility to serve basic emergency services. Score of mean value or above mean was considered as a good level of knowledge. Two day training was given to data collectors and supervisors on the objective and importance of the study before data collection. Trained data-collectors four BSc and 2 MSc supervisors were used.

The collected data were entered and coded in to Epi-info 3.5.4 version statistically package and imported in to SPSS version 20 software. Frequency distribution and percentages were computed and presented by tables and figures to describe socio-demographic and other characteristics of respondents. Both bivariate and multivariate logistic regression analysis was done to determine the association of the variables. Variables significant analysis (p<0.25) entered in to multivariate logistic regression. Odds ratio with 95% CI and statically significant were declared p<0.05.

The expected number of deliveries per year rate, ANC and postnatal care coverage was estimated by multiplying the crude birth rate (CBR) by total population of the zone. Population coverage of signal functions was estimated following UN guideline by calculating the number of facilities for 500,000 populations, providing related services in the last three months prior to the date of assessment using the population census data of 2007 as the denominators.

Ethical approval and clearance was obtained from Dilla University, College of health sciences and medicine, institution review board (IRB). Letter of permission was obtained before the beginning of data collection from Gedeo zone health bureau. Permission letter were provided to facilities for proceeding data collection. After that participants oriented about the purpose and procedure of data collection, and that confidentiality and privacy ensured. It is also cleared that participation fully based on the willingness of participants using written consent. 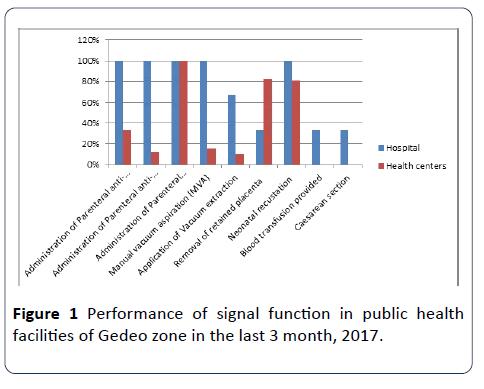 Figure 1: Performance of signal function in public health facilities of Gedeo zone in the last 3 month, 2017.

Practice of signal functions in the previous three months was assessed in this study. 87% of the obstetric care providers were practiced FANC and about 64% were performed episiotomy, 34% were provide manual removal of placenta. Skills which were practiced by the least proportion of staff were management of pre-eclampsia/eclampsia and assisted vaginal delivery. 83% of obstetric provides were mentioned all essential action related with immediate new born care. 59% of the staff mentioned all essential components of active third stage management. Monitoring labor by using partograph and managing newborn with fail to breath, all essential steps were mentioned by 23% and 44% respectively. 17% of the staff mentioned all the essential action for managing newborn sepsis and 21% of the staff was practiced the management of postpartum hemorrhage.

Records of 320 women were reviewed. Among those women only 17% were Primigravidae and the rest were multigravida. Regarding length of stay after deliver 87% leave the facility within 6 hours and only 6% stay for 24 hours. Only six eclampsia cases were found and two of them were referred after administered loading dose of magnesium sulfate and the remaining four were refereed without any intervention. In more than half of the case most labor was monitored without partograph and only 23% were used to monitor and only 12% of it fill all necessary information in the partograph. During their visit only 37% of women received all important components including abdominal examination, fetal heart beat, blood pressure measure and all essential laboratory investigations.

The knowledge of the obstetrics care providers towards basic emergency obstetric and newborn care had 47% (n=127). Majority providers (97.8%) had knowledge about sign of labor and (91.7%) of care providers stated components of active third stage management. Drugs of choice by obstetric care providers for PPH management were oxytocin 87%; Ergometrine 11.9% and Misoprostol 1.1 respectively (Table 2 and Figure 2). 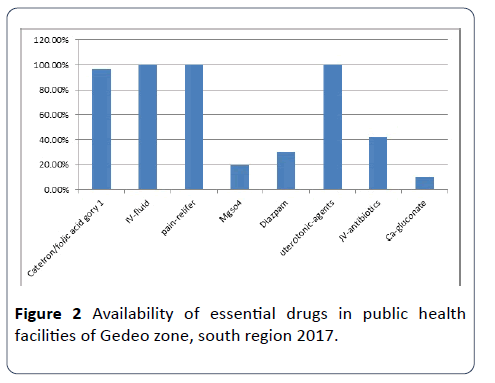 The result of this study showed that 47% of obstetric care providers were knowledgeable towards emergency obstetric and newborn care. This might be due to providers work experience variation and due to access of the training.

The institutional delivery rate is 6.4% which is very low. This is the percentage of deliveries conducted in EmONC facilities is lower than the recommended minimum of 15%. This might be poor utilization of health facilities for maternity services in the study area [11].

Utilization of ANC services is low in this zone when compared with the national averages: 80.3% versus 97% for at least one ANC visit and 49.5% versus 81% for at least 4 ANC visits [12]. This difference is might be due to poor community sentisazation program of providers.

This study also revealed that 40% of the health facilities were access to the electricity. This is not consistent with Study in Somali revealed that Only 1 out of 6 MCHs had electricity [14].

Similar study in Somalia revealed all the health facilities did not have any means of transport facility for referral cases. Patients’ families were responsible to make such arrangements on their own [14]. Studies in Uganda state a car ambulance were available at 46% of the facilities [15]. This difference is might be due to different in time of the study.

Our study revealed 40% of the health facility has their own sphygmomanometer in their MCH unit where as 55% of the unit have thermometer. This is nearly consistent with study in Tanzania state the availability of clinical equipment was generally lower: 61% of facilities had a blood pressure machine, 70% had an infant weighing scale and 57% had a speculum [16]. Similarly Study in Malawi stated that all the facilities did not have postnatal care monitoring equipment like sphygmomanometer and thermometers in their maternity departments. In addition, guidelines and teaching aids for postnatal care were not available in all the facilities [17]. This is might be due to poor resources in study area.

There is shortage of medical equipment’s and essential drugs. In addition there is low coverage of infrastructure like water, light and telephone. Therefore the actual trend of EmONC is diminishing, that is the majority of the health facility have not performed EmONC as needed.

We are very grateful to Dilla University for approval of ethical clearance. We would like also to extend our gratitude to zonal administration and respective Woreda/district/health office for providing us the necessary information and cooperative support for the accomplishment of this research work. Then, we would like to thank all obstetrics care providers who participated in this study for their commitment in responding to our interviews and for observations. Our gratitude also goes to data collectors and supervisors for their hard work patience in obtaining necessary information.