Manal A AlGhsyar1*, Samir A Salem2 and Sahar H Ahmad3

Copyright: © 2018 AlGhsyar MA, et al. This is an open-access article distributed under the terms of the creative commons attribution license, which permits unrestricted use, distribution and reproduction in any medium, provided the original author and source are credited.

Increasing world population, increasing demand for and cost of protein-rich foods, and the continuing need to improve the nutritional and functional properties of protein ingredients have contributed to a greater research into blends or composites as food ingredients. Proteins co-precipitates have a range of biological, physical, chemical, functional, sensory and nutritional properties giving the potential application as product ingredients in the food industry, though relatively little published information is available on this subject. Camels serve as a major source of milk and meat in the Middle East, where there are great number of camels in Saudi Arabia, which is the second largest country in the production of camel milk after Somalia; Camel milk is considered a highly consumed food in the Arab Gulf states. Also, Proteins from Camels’ and Goats’ milks are characterized with different properties than cow proteins, and they are an important source for milk in the desert areas. The aim of this study was to obtain the co-precipitates proteins of camels’ and goats’ milk using different methods such as heat treatment with or without addition of calcium chloride (CaCl) or hydrochloric acid (HCl) as well as precipitation after the concentration of proteins by ultra-filtration and then study their physical and functional characteristics to recommend their use in the food industry.

Milk proteins have long been used as additives for processed food. Their nutritional and functional properties make them one of the best nutritional supplements [1]. Numerous markets are interested in functional proteins and in utilizing them in the food industry which has led to the increasing focus on improving production and separation methods of milk proteins of specific functions [2]. Producing co-precipitates proteins have a number of benefits such as increasing coagulum and functionality as it has higher nutritional value compared to Cazin [3]. Methods for producing milk protein concentrates have widely been developed with differences in structure and characteristics that can be used easily as a food component [4-6].

The industrial future tends to develop new consumer products and find alternatives to cow's milk. In this regard, camel's milk and goat's milk often turns viable candidates [1]. Camel's milk offers a unique advantage for regions where camels are found in large numbers. It urges the usage of nutrition techniques in the production and treatment of camel's milk. Interest for the variety ingoat's milk products has increased as well as researchers’ interest in goat's milk commercially as an alternative to cow milk products used in food rations or for children allergic to cow's milk [16-20].

Attention should be given to research by improving marketing of high-quality and of long life milk products. This will generate support from the private sector to advance the development of camels’ products in countries where camels are found in large numbers and to satisfy demand by offering camel's milk especially with the growth of the Arab community [1]. Now is the time for transformational food industries to have come to realize that milk proteins have considerable power to contribute different characteristics in order to enhance a variety of food products [21,22].

Preparation of co-precipitates proteins for camels and goat’s milk in different technological methods, using heat, CaCl and acid or using ultrafiltration to concentrates the protein before precipitation.

Study the physiochemical and functional properties for the protein to identify and learn about its advantages.

To reach important recommendations for conducting research to manufacture some products that fit these characteristics properties.

2. The chemicals were provided by the Postgraduate Laboratories at College of Design and Home Economics- Qassim University.

1. Preparation of milk: Camels and goats milk were separated at 40°C at pH 6.3

2. Preparing co-precipitates: The first method was by heating the milk until it reached 75°C for 5-20 minutes then adding Calcium 0.2% or HCL 0.1 N. The precipitation of the protein was at 85-95°C and pH 5.1. Collecting of proteins was done at room temperature and then filtered through Whatman No.1 paper. Washing the precipitate and removing water was later cared out. The drying process was carried out in a hot air oven at 55 and then finally, grinded the precipitate to a soft powder.

The second method was by using Ultrafiltration (UF). The concentration of milk was determined by Ultrafiltration, using (Ultrafiltration unit Reverse Osmosis–Model: ARMFILD C03962) to Fold-2. The milk was heated to reach 75°C and was hold for about 20-25 minutes. Next, steps were carried out as per the first method.

The gelatin flavor was prevented by adding 0.5-0.1 sodium sulfate and flavor stability was improved by heating the solution to encourage the volatilization of unwanted flavor components that can be removed during drying.

Statistical analysis: The data were statistically analyzed by ANOVA analysis with (SPSS) 24th Edition and the difference were significant at probability values (P<0.05).

1. The highest percentage of the refinement of the inherent sediment for each camels’ and goats’ milk using HCl was 27.14%, 24.7% respectively. This process was noted by ultrafiltration while adding HCl to goat’s milk significantly higher than camel’s milk [6]. 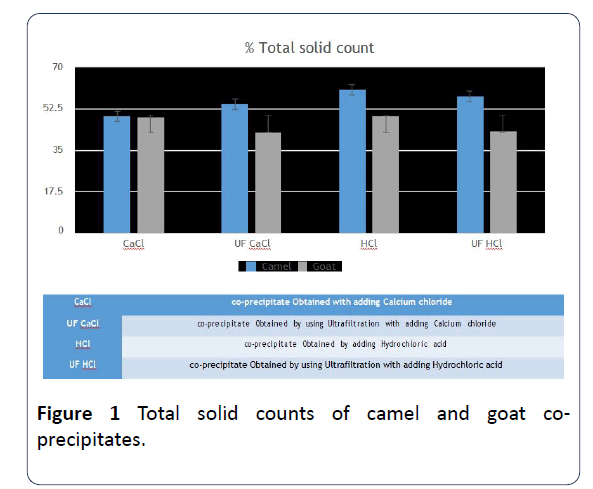 3. It has been found while studying the chemical composition of co-precipitates that there is a significant increase in goats’ milk moisture content at level 0.05 for that was precipitator with acid and then followed by the one that CaCl2 was used and the lowest is the one that has been done by ultrafiltration with HCl.

4. While in camels’ milk the highest significant percentage of co-precipitate moisture was when using CaCl2 and the lowest that was done by ultrafiltration with CaCl2 (Table 1).

7. There was a significant difference in the content of Lactose in the co-precipitates of camels’ milk that was higher than goats’ milk. 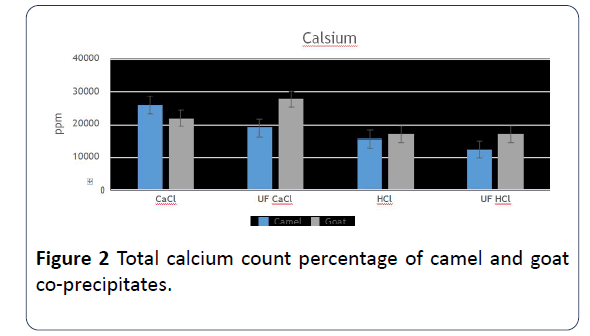 9. There were non-significant differences between the samples of cows‘ and goats’ milk co-precipitates that were prepared using different methods in pH or acid number values [15].

10. While there were some significant differences at 0.05 in the solution’s viscosity 10% of co-precipitates between different samples. The highest viscosity value of camels’ milk co-precipitates was the sample that used CaCl2 or was done by ultrafiltration with CaCl2. Meanwhile, there were non-significant differences regarding goats’ milk, and its highest had HCl (Figure 3). 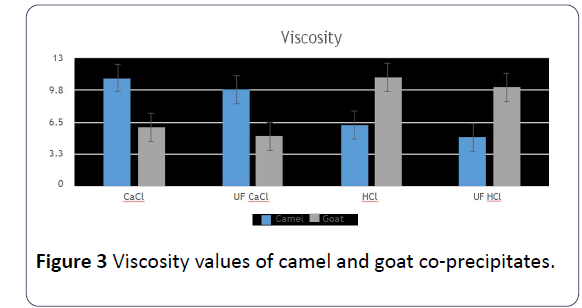 11. The precipitation substance had a noticeable effect on coprecipitates’ color degree. The whitest and the shiniest camels’ milk sample was the one that was precipitated with HCl, then the sample that was prepared by ultrafiltration either by using CaCl2 or HCl.

12. While the co-precipitates of goats’ milk were significant higher values when prepared by ultrafiltration with CaCl2.

13. As for the degree of greenness (a), there were significant differences between camels’ milk co-precipitates samples conversely to goats’ milk, except using ultrafiltration with HCl. As for the degree of yellowness, the highest value of camels’ milk co-precipitates was the sample that was prepared using ultrafiltration with HCl. It was of a more significant in goats’ milk than camels’ milk (Table 2).

14. Concerning the solubility of co-precipitates, the highest solubility was at 25°C and on pH=7 for the samples that were done by ultrafiltration with adding either HCl or CaCl2 to camels’ milk. The solubility has increased with the increase of protein concentration (Figure 4) [19]. 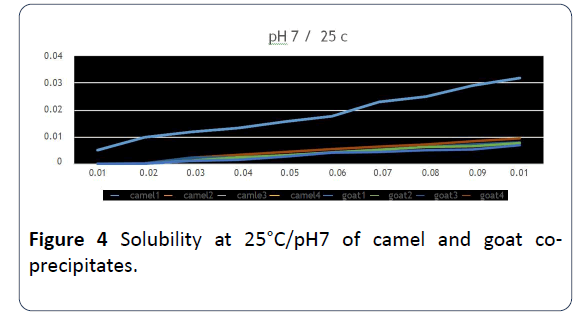 Table 3: C o-precipitation of camel and goat by using CaCl and Hcl. 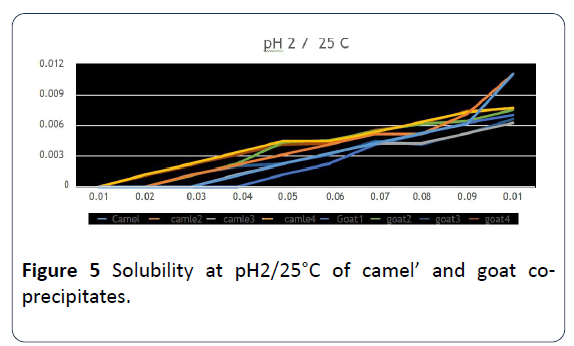 16. The parameters that used ultrafiltration with HCl for both camels’ and goats’ milk that HCI was added to, and to goats’ milk that HCl was added to only, significant differences than the rest of the parameters in both protein distribution and soluble nitrogen Index. This shows the effect that ultrafiltration parameter has on protein spread and on soluble nitrogen Index (Figures 6 and 7). 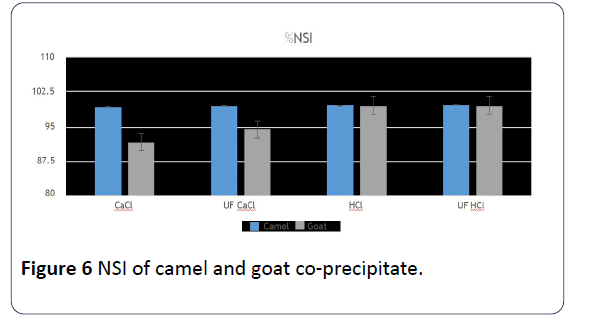 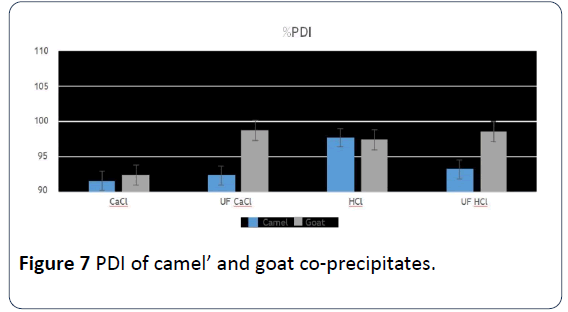 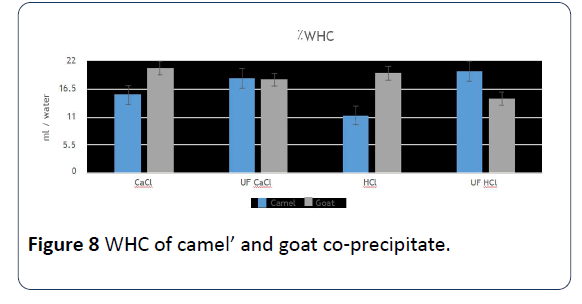 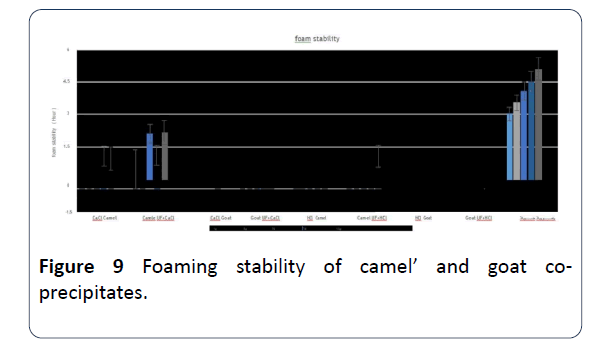 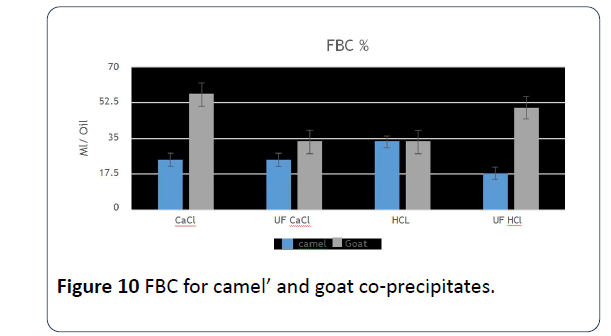 22. In examining fat emulsion stability, CaCl2 goats’ and camels' milk co-precipitate were the best. Followed by 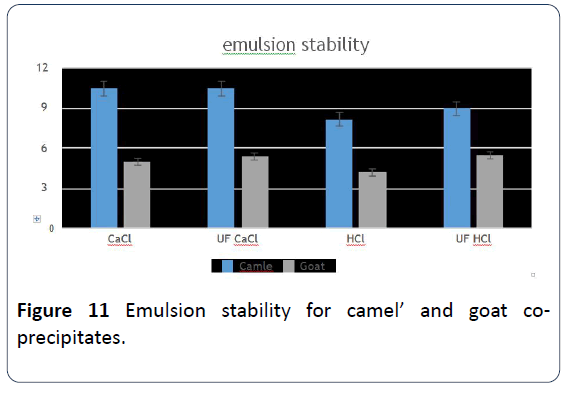 23. An electrophoresis (SDS) separation was done to the coprecipitates proteins of both goat’s and camel’s milk and there weren’t any intangible differences in the casein particles nor in the whey protein whether in regards to electrophoresis rates or the molecular weight for each protein except for case number 1 in which CaCl2 was added to it, as a decrease of the special patterns density has been noted as well as a huge decrease in betalactoglobulin. As for goats’ milk precipitated, there hasn’t been any intangible difference in any of its proteins whether in electrophoresis rates or the molecular weight, the density or the concentration of protein has been noticed to be increasing when treated with ultrafiltration and with added HCl, and it was observed also that the whey proteins disappeared significantly (Figures 12 and 13) [16]. 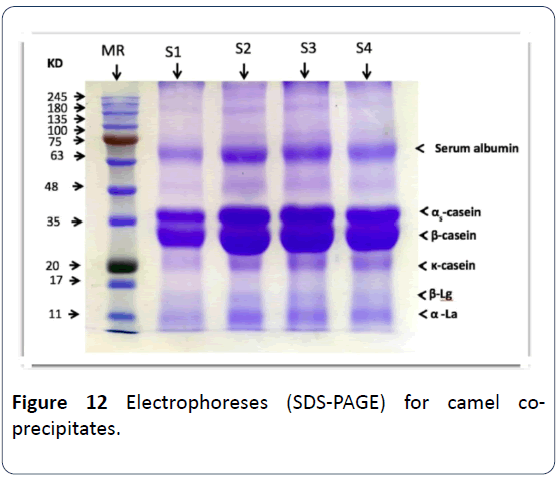 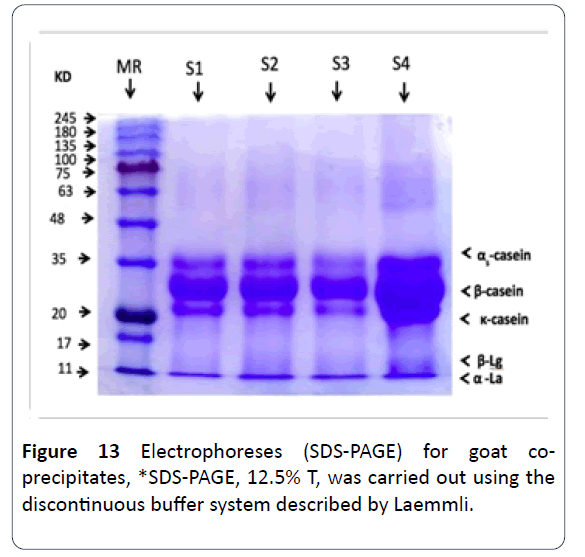 The co-precipitate can be used directly to supply or strengthen food sources of low quality or low protein content and can also be used in different foods to raise nutritional value. This requires further Interest to be taken to be used in many goods.

1. Research the minimum protein recovery including extraction and precipitation conditions.

2. Research the preparation of co-precipitate using more than one source of proteins.

3. Evaluation of the effect of supplementation of coprecipitate protein nutritionally and biochemical in both laboratory and experimental animals on chronic diseases such as diabetes, high blood pressure.

4. Evaluation the effect of co-precipitate protein sediment on people who are allergic to bovine s Casin.

5. Research the effect of co-precipitate treatment on food products.

6. Research the effect of co-precipitate protein on the sensory properties of food products.

7. Evaluation of co-precipitate effect on the functional properties in food products.

• Suggested studies on its use in the following foods are:

• Meat products using co-precipitate prepared by ultrafiltration method with the addition of calcium chloride or hydrochloric acid to both camel and goat milk.

It’s recommend to keep studying the application of these different types of co-precipitates in different kinds of food, especially the ones treated with ultrafiltration with added HCl or CaCl2 like juice or soft dairy products or ice cream and using goats’ milk co-precipitates with added HCl or CaCl2 in making baked goods and meat products and its effect on their functional, organoleptic properties. It’s also recommended to research the effect of added co-precipitates protein on the nutritional and biological value, whether by laboratory experiments or animal testing (those used for testing chronic diseases like hypertension or diabetes).

It’s recommend to keep studying the application of these different types of co-precipitates in different kinds of food, especially the ones treated with ultrafiltration with added HCl or CaCl2 like juice or soft dairy products or ice cream and using goats’ milk co-precipitates with added HCl or CaCl2 in making baked goods and meat products and its effect on their functional, organoleptic properties. It’s also recommended to research the effect of added co-precipitates protein on the nutritional and biological value, whether by laboratory experiments or animal testing (those used for testing chronic diseases like hypertension or diabetes).