Background: The syndrome of obstructive sleep apnea (OSA) has for three decades about an identifiable and recognized pathological entity with multiple consequences in the public health. The appearance of the OSA is estimated 2-4% of the world population while some of the diseases associated with such obesity and cardiovascular diseases are growing faster even by the younger age. The aim of the present study was to identify the prevalence of obstructive sleep apnea syndrome (OSA) in a sample of students of Technological Educational Institute of Crete. Material and Method: The sample consisted of 400 students. Obstructive sleep apnea was quantified using the Berlin questionnaire which apart from the demographic data, it included three categories (10 questions) designed to illicit information regarding snoring (category 1), daytime somnolence (category 2) and the presence of obesity and/or hypertension (category 3). Somatometric measurements (Height, Weight, hip and waist circumference) and arterial blood pressure were carried out. Also, apprised parameters that concern the heredity the habit of smoking, nasal congestion, sudden awakenings and respiratory problems. BMI was calculated as the body weight divided by the square of height (expressed in kg/m2). Analysis included Kruskal Wallis test, the Mann Whitney test analysis, the non-parametric Mann Whitney test analysis, the Spearman correlation coefficient and the Coefficients of Cronbach's. The data analysis was performed using the statistical programme IBM SPSS 19.0. Results: The prevalence of OSA was found 1.0% of the sample. Only 4 students were diagnosed with high risk and 48 (12.0%) students with low risk according to Berlin Questionnaire. Snoring had the highest frequency 8% and followed by obesity with 5.3%. Also, snoring have all the people with increased risk for OSA in contrast to those with low or no risk (100% vs. 33.3% and 3.4% respectively, p = 0,008). Significantly more women were at high risk than men (1.5% vs. 0.5%, p = 0,040) but fewer low (8.1% vs 15,8%, p = 0,040). In addition, older students had significantly higher prevalence of low and high risk (p-trend = 0,005) while those with a high or low risk had significantly higher average levels of obesity indices, p

Obstructive sleep apnea (OSA) is characterized by repetitive partial or complete closure of the upper airway during sleep. This can happen many times during night in patients with moderate-to-severe [1]. The OSA is characterized by the presence of at least 5 events per hour of sleep, full stop or significantly reducing of the air flow in the upper airways lasting > 10 sec (apnea-hypopnea) accompanied by nightly / or nightly and daytime symptomatology [2]. OSA is part of a spectrum of sleep-related breathing disorders that includes snoring, upper airway resistance syndrome and central sleep apnea. The OSA is the combination of obstructive apneas with tiredness during day or recurrent awakenings [3].

Many studies assessing the prevalence of OSA syndrome have been carried out in young population [4,5]. A first descriptions given for OSA was severe apnea that occurs in middle age obese men [6]. The 33% of OSA patients are women especially in people who are in old age or from Southeast Asia [7,8]. OSA is frequent and it is found in 2% of middle-aged women and 4% of middle-aged men [9]. The therapy of OSA includes weight loss, upper airway surgery, oral appliances, and nasal continuous positive airway pressure [10-13]. The most of those with OSA remain without diagnose. Only the 10% of the population was checked (screening) for the presence of OSA. This is a common disorder with a frequency similar to the bronchial asthma and diabetes in the general population [14].

Snoring is the most symptom of obstructive sleep apnea (OSA) followed by sleepiness, which was reported by a third of the population sample [15]. Also, excessive daytime sleepiness (EDS) is one of the most frequent symptoms in patients with OSA. Moreover, obesity appears in up to 50% of obese male.16 Slim people also can have OSA [17]. Results have shown that 40% of the total obese suffer from sleep apnea while conversely 70% of patients with sleep apnea are obese [18]. The increasing severity of OSA is an important risk factor for the development of hypertension over four years [19]. The effective treatment of OSA in hypertensive patients resulted in significant reduction of blood pressures [20].

In a study of Nena et al., [21] for evaluation of working capacity in patients with OSA without other health problems showed a significant correlation the prices of EWPS and ESS scores (r2 = 0,127, p <0,001). Also, Sjosten [22] showed that patients with OSA had significantly increased number of lost working days. Finally, OSA patients are more likely to have a car accidents [23].

The aim of the present study was to estimate the prevalence of obstructive sleep apnea syndrome (OSA) in a population of Greek adult students of the Technological Educational Institute of Crete and the correlation with other health parameters.

The study was conducted in the Technological Educational Institute of Crete over a 3-month period (October - December 2010). We conducted a population-based cross-sectional study on a randomly selected young population aged 18 years or more, who visited doctor’s office for any reason. Collection of data was performed using the Berlin questionnaire. The final selection of 400 students was determined by the principles of convenience sampling. There was voluntary attendance of students.

The Berlin Questionnaire consists of three categories (10 questions) designed to illicit information regarding snoring or “3–4 times per week” (category 1), daytime somnolence (category 2) and the presence of obesity and/or hypertension (category 3). In categories 1 and 2, patients answering “almost every day” or “3–4 times per week” were considered to have significant symptoms. Response in categories 1 and 2 was positive if greater than or equal to two items of the category were positive. Response in category 3 was considered positive if the subject had obesity, hypertension, or both. The presence of obesity and/or hypertension in category 3 was considered significant. A patient was considered to have a high likelihood of sleep disordered breathing if significant symptoms exist in 2 out of the 3 categories.

Apart from the demographic data were carried out somatometric measurement (height, weight, waist circumference to height, waist and neck circumference) and arterial blood pressure. Also, It was calculated the Body Mass Index (BMI) and were apprised parameters that concern snoring, age, gender, daytime sleepiness, smoking, nasal congestion, heredity, sudden awakenings and respiratory problems. BMI was calculated as the body weight divided by the square of height (expressed in kg/m2). Obesity was defined as BMI 30 or more.

Statistical analysis was performed by using the SPSS 19.0. Reliability was assessed by internal consistency using Cronbach's alpha test. With the x2 test analysis were analyzed the distributions of the descriptive characteristics and the frequency distributions in Berlin questionnaire among students. Based on the correlation coefficient by Spearman were carried out correlations between the descriptive characteristics of somatometric measurements, blood pressure, medical or family history. Finally, the control of the somatometric measurements’ levels and the arterial blood pressure’s levels among students with none, low or high risk was analyzed with the non-parametric Kruskal Wallis test analysis. Also, the non-parametric Mann Whitney test analysis was used between male and female.

The table 2 presents the prevalence of normal weight, overweight and obesity. There is higher percentage of female that were obese than male based on BMI (6.2% vs. 4.4%), while were fewer overweight women (18.8% vs. 27.1 %). But generally the percentage of overweight / obesity was higher among male students compared to female students (25.0% vs. 31.5%). The prevalence of high blood pressure showed statistically significantly higher percentage of male than female students. Male had higher levels of systolic or / systolic and diastolic blood pressure (4.9% vs 0.0%, p <0.002). Also, the prevalence of smoking showed that there is no statistically significant difference between male and female smokers (39.4% vs. 40.6%, p = 0.595). 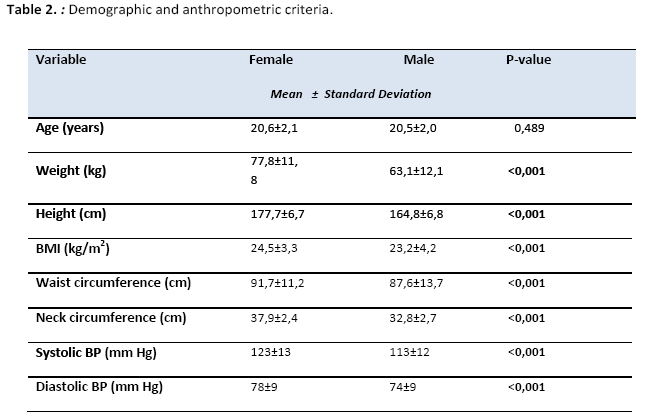 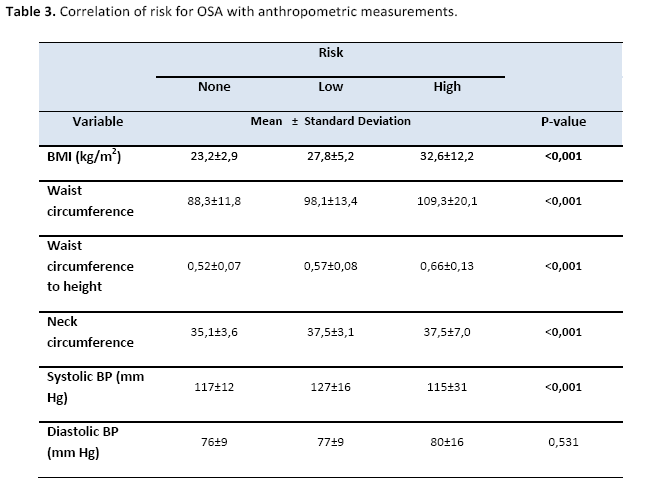 In this cross-sectional study conducted in the Technological Educational Institute of Crete we have shown that the prevalence of OSA particularly in people at high risk was found at very low frequency while those with low risk were found at very high frequency. Netzer’s study [24] compared results between the United States and Europe found that OSA prevalence in the United States was 35.8% than in Europe 26.3%. Estimates of disease prevalence worldwide are in the range of 3% to 7% in adult men and 2% to 5% in adult women [25]. In the present study, snoring, BMI, hypertension, waist circumference, waist circumference to height and neck circumference had been shown to be predictors of OSA.

In the present study, female was found to be high risk for OSA versus male and male was found to be low risk for OSA versus female. Accordingly, data supports that sleep apnea is also more prevalent among men and during sleep in the supine position [26]. Snoring and BMI were the most significantly risk factors for OSA among students. All the students with high risk for OSA have snoring in contrast to those with low risk or no risk. According to Haqqee et al., [27] showed a high prevalence of snoring and frequency of snoring with apnea. Students with high or low risk for OSA have significantly higher levels of obesity. The present study shows that the prevalence of overweight and obesity was higher in male than female students whereas, no significant difference between them. A survey showed that BMI was associated with OSA risk in Asian and Western populations [28]. In Greece, in a sample of 989 students of the Medical Faculty of the University of Crete found that the prevalence of overweight or obesity was 39.5% in male and 23.3% in female. Central obesity levels were significantly higher in men than women. Also, waist circumference, waist circumference to height and neck circumference were significantly risk factors for OSA [29]. In addition, the risk of OSA was higher in patients with large neck circumference and central obesity [30].

Finally, the present study showed that the frequency of daytime sleepiness, smoking, the nasal congestion and the inheritance were not associated with low and/or high risk for OSA. Excessive daytime sleepiness is one of the most common symptoms in patients with OSA [32]. Nevertheless; in the present survey the daytime sleepiness is not found to be associated with the occurrence of OSA. A cross-sectional survey of 2201 high school students conducted in Canada shows that most students felt "really sleepy" during day [33]. In the present survey a high percentage of male and female were smokers. Nevertheless, the smoking is not found to be associated with the occurrence of OSA (low and high risk). Smoking is related to sleep apnea in a dose-response relationship [34]. In the present study was not found the inheritance to be associated with risk for OSA. It is not differ significantly the frequency of inheritance with no, low or high risk. The heredity has been suggested as a risk for sleep apnea, given that a number of studies have reported a significantly higher prevalence of sleep-disordered breathing in relatives of OSA patients [35]. Sudden awakenings and the respiratory problems showed to be not associated with the high risk for OSA. 25% of students with high risk for OSA had sudden awakenings and respiratory symptoms. Of those who had nasal congestion, 13.2% was with no risk for OSA, 20.8% was with low risk and 25% had high risk. Accordingly, a number of patients with OSA report waking at night with a choking sensation, which can be quite frightening and presumably reflects an episode of outright wakening during an obstructive apnea.36 However, there is no clear link between obstructive airway diseases and OSA [37].

These findings were observed despite the fact that two potential limitations were emerged. Firstly, our population was younger than most reported series, a finding that can reduce the number of the affected students. A second limitation was that most of the subject information was self-reports that might be affected by misclassification, incomplete information.

The prevalence of OSA particularly in people at high risk was found at very low frequency while those with low risk were found at very high frequency. Our data suggests that snoring and a higher BMI constitutes strong predictors of OSA followed by hypertension and obesity. Although OSA prevalence rates were not alarming, the continuous increase of BMI, central obesity, snoring and hypertension may increase the rates in the next years. Advisory and education are considered important for primary care nurses and general practitioners regarding this common and potentially serious syndrome. Students at high risk for OSA should be referred for further treatment and assessment of respiratory function.