The Promotion of Smoking Habit through Music: Pilot Study

Introduction: The involvement of music is particularly important either in physical and mental health or in emotional and social development of humans. Music contributes to the promotion of health, the rehabilitation of disability and the socialization of individuals and it maintains well-being. The effect of music either on the human body or on the human behavior is expressed variously. Smoking is a deadly habit that can be prevented. The start of smoking is a global public health problem. The promotion of smoking through music seems to have a direct influence on the adoption of tobacco addiction patterns and behaviors.

Aim: The objective of this study was to determine the promotion of smoking through music.

Material and Methods: The data were collected by random from musical foundations of the internet, using a questionnaire. The study includes 400 Greek and 400 English-language songs. Statistical analysis was performed using the statistical package for social science SPSS 17.

Results: The proportion of viewing smoking habit is 8% for Greek lyrics and 6% for English. The 45% of the Greek songs and 55% in the English displayed alcohol intake and smoking habit. No track did appear anti-smoking messages.

Conclusions: The results show the existence of a serious social problem with a direct impact on human health. Institutions have to contribute to the increase of anti-smoking messages with content and intensify anti-smoking efforts.

Music is a means of entertainment, culture, education, communication and physical and mental wellbeing from ancient times until today. Historical references and newer references reveal the multifaceted contribution of both human expression and in character [1-5].

The involvement of music is particularly important either in physical and mental health or in emotional and social development of humans. Music contributes greatly to the promotion of health, maintaining wellness, rehabilitation of disability and the socialization of individuals [3-5].

The effect of music either on the human body or on the human behavior expressed variously. Many studies show that there is a statistically significant relationship between music and the physical or mental level of health [2].

Many systems and organs of the human body seem to be affected at the sound of music. The improvement of heart rate and breathing, the relief from pain and the regulation of body temperature are among the most frequent positive effectiveness [6-7].

The mental health of people seems to be greatly affected on hearing a melody. Specifically, the senses are stimulated, memory is enhanced, stress is reduced, the modified behavior, learning and communication improvement [5,8].

Music also seems to play an important role in the socialization and viewing social standards, throughout the course of the development process of human. In childhood, the music is a useful tool for the normal psychosocial development because contribute to expressiveness and learning while enriching the emotional world of the child [8-10].

The period of adolescence is closely connected with the strong involvement of young people in the arts and sports. Young people show their emotional world, mental disposition and their sexuality through their musicality and versification. It is estimated that teenagers listen daily minimum 3 hours of music, while the average weekly amounts to 22.4 hours. Predatory or racist behavior, violence and use of addictive substances prominently displayed at the period of adolescent, and is mostly closely related to music [8-10]. The objective of this study was to determine the promotion of smoking through music.

Summarizing the descriptive statistical analysis we observe that the projection rate of smoking habit is 8% for Greek lyrics and 6% for English. 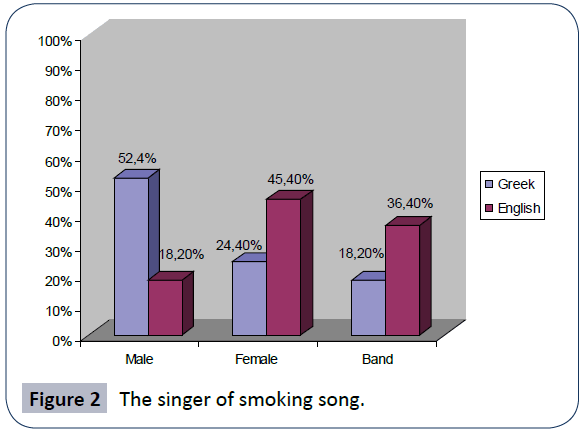 Figure 2: The singer of smoking song. 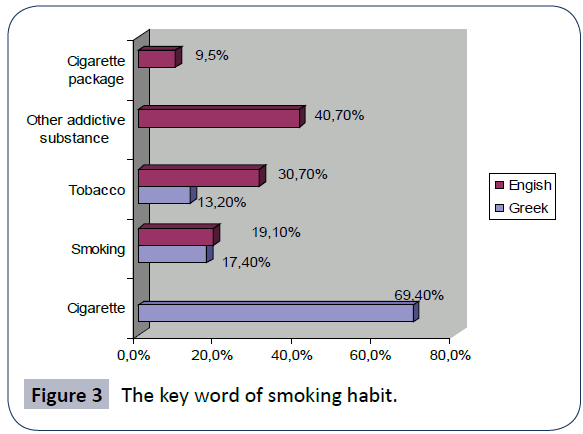 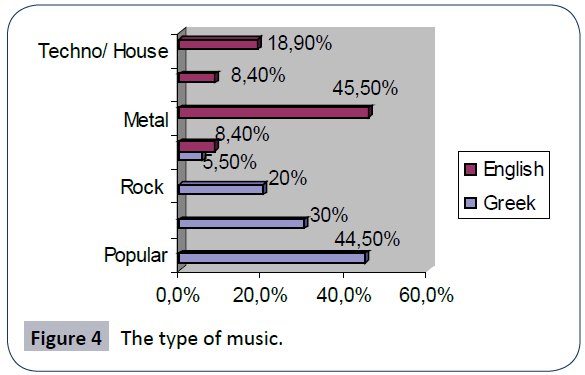 Figure 4: The type of music. Figure 5: The mood of the song.

In both categories the rates of fumigant activity and concurrent alcohol are very high. Greek songs displayed alcohol intake and smoking at 45% while 55% in English. Finally did not appear antismoking messages in any track.

According to the results the smoking activity through music stands at 8% for Greek songs and 6% for English. A similar study by Primack et al. showed that the songs with smoking content were 2.9%. Another study by Mulder et al. [23,24] in adolescents aged 12-16 years (n=7.324), showed that music has positively associated with the addictive substance use.

As illustrated by the present and Primack study [11] bibliography the delivery rate of smoking activity through music varies is less than 10%. Although the rates of smoking projection are relatively low, however, it seems to have a direct effect on the smoking behavior of individuals who are actively involved with music.

The presentation of tobacco use takes place in different ways and means. In Greek lyrics occurs more frequently the cigarette and in English some other addictive smoking substance (e.g. Marijuana, snuff, cigar, kretek, and pipe smoking.). A similar study by Primack et al. [11], showed that the 13.6% of songs shows marijuana use and 11.5% some other obscure stuff. The differences are probably due to the different cultural and social issues that determine the country of each song. Significantly presents the results of this study on the type of music and the incidence of tobacco use. In Greek lyrics observed in “popular music” (44.5%), followed by “artistic” (30%), the “rock” (20%) and “pop” (5.5%). In English lyrics due to different culture and social stratification, the majority of the sample concerned the “metal music” (45,5%), followed by the “electronic dance” (18,9%), “jazz” (8.4%) and “pop” (8.4%).

The study of Mulder et al. [12] shows that the “electronic music” and “reggae”, were associated with greater exposure smoking content than the “pop” and “classical music”.

The survey of Kelly et al. [10] shows that teens who listen to "heavy music" e.g. “rock”, “metal” etc., exhibit violent, antisocial and delinquent behavior, presented moody and pessimistic while most have family problems.

Another study by Backer et al. [14] says teens who listen to “rap” and “metal music” exhibit antisocial behavior, which appears in the form of violence, theft and use of addictive substances.

As revealed by the results of this study and the review of international bibliography, the Rock and Metal music show increased smoking activity and probably has positively correlation with the smoking behavior of adolescents.

The combination of smoking activity and alcohol intake appears particularly strong. The 45% of the Greek and 55% of the English verses show alcohol and smoking activity. A similar study by Primack et al. [11] displays songs with smoking and alcohol use at 23.7%. The present study shows a higher incidence of alcohol Primack. The difference is probably due to the sample and genres of the study population.

The results show a common and continuous view of smoking through music. A higher incidence of smoking observed in Metal and Popular music. In Greek music the higher rate referred to separation and smoking while in English music the songs refer to loneliness and smoking. Further more either in the Greek or in the English song antismoking messages are absent.

Institutions have to contribute to the increase of anti-smoking messages with content and intensify anti-smoking efforts. The government should implement a strict legal framework harmonized with the demands of modern society. The family can contribute greatly to preventing the problem. The preoccupation of parents with their children gives teenagers the all the necessary supplements to identify and prevent significant adverse health conditions. Finally, the contribution of health professionals is considered valuable. Their scientific competence and their cognitive background in designing and implementing health education programs can be a valuable consultant to the prevention and reduction of the problem.