Copyright: © 2018 Yakob B, et al. This is an open-access article distributed under the terms of the creative commons attribution license, which permits unrestricted use, distribution and reproduction in any medium, provided the original author and source are credited.

Background: Tuberculosis (TB) is a chronic infectious disease mainly caused by Mycobacterium tuberculosis. TB remains a major global health problem and cause of illness in millions of people each year. This study aimed to reveal trends in treatment success and independent predictors of TB in public health facilities in Sodo Town, Ethiopia. Methods: This was a facility-based retrospective study at public health facilities in Sodo Town, Ethiopia. 725 patients over a three-year period were analyzed by logistic regression. Data were entered in to Epi Info v3.5.4, thoroughly cleaned and analyzed in SPSS v20. Results: Of 725 TB patients, 591 (81.5%) were successfully treated, 41 (5.7%) died, 43 (5.9%) defaulted, 6 (0.8%) failed treatment, and 44 (6.1%) were transferred out. The odds of treatment success was 4.43-times greater for patients treated in 2012 compared to those treated in 2015 (aOR 4.43, 95% CI 1.11-16.33), while patients treated in 2014 had a 4.11-times greater probability of succeeding treatment than those treated in 2015 (aOR 4.11, 95% CI 1.20-14.12). Pulmonary-negative TB patients had a 4.72-times greater odds of succeeding treatment than extra-pulmonary TB patients (aOR 4.72, 95% CI 1.03-21.67). Likewise, HIV-positive TB patients who started co-trimoxazole preventive therapy (CPT) were 4.8- times more likely to succeed treatment than their untreated counterparts (aOR 4.80, 95% CI 1.01-22.78). Pulmonary-positive TB patients at directly-observed treatment, short-course (DOTS) initiation with negative sputum smear results at the end of the 2nd month had 31.73-times greater chance of succeeding treatment than those who were smear positive after two months of intensive-phase therapy (aOR 31.73, 95% CI 5.9-58.63). Conclusion: The overall treatment success rate was low.

The World Health Organization (WHO) declared TB a global public health emergency in the 1990s, and efforts to improve TB care and control intensified at national and international levels with the development of the directly-observed treatment, short-course (DOTS) strategy [3].

Of the six WHO regions, the highest treatment success rates were reported in the Western Pacific, Southeast Asia, and Eastern Mediterranean [5]. The treatment success rate (TSR) was 79% in Africa and 75% in America and Europe [5]. In 2012, Ethiopia reported a total TSR of 91% for all new cases, which was encouraging and above an average TSR of 22 high-burden countries (HBCs) (88%) and worldwide (86%) [6].

The steady spread of multi-drug-resistant (MDR)-TB and extensively drug-resistant (XDR)-TB in many areas indicates that local control measures for TB prevention are unsatisfactory, including the quality DOTS programs [7]. An invasive early detection and standardized management of TB is mandatory to minimize TB burden. The main focus of this study was to determine the level of TSR-associated factors in TB patients.

The WHO has listed 22 HBCs each year since 1997 for TB. According to the 2015 WHO report, 41% of HBCs were African countries, especially sub-Saharan nations including Ethiopia [5]. Worldwide, 3.7% of new and 20% of previously treated TB cases were estimated to be MDR-TB, which is mostly due to poor TB management [3].

Ethiopia is, therefore, highly endemic for TB, where the disease is the leading cause of mortality and morbidity [6]. Ethiopia has applied numerous strategies to prevent and control TB infection, including the expansion of DOTSproviding centers in rural and remote areas and the involvement of private health institutions. TB/HIV collaborative activities were also given due attention to halve morbidity from dual infection. The total time of DOTS shortened from 8 months to 6 months to improve adherence and increase the chance of completing treatment and hence improve TSRs [8].

The study was conducted in Wolaita Sodo Town, which is a located 385 km from Addis Ababa and 160 km from the regional capital Hawassa. Wolaita Sodo Town has two hospitals (one public and one private), three health centers, 18 health posts, and 32 private clinics (10 medium and 22 primaries) providing health services. Among these, all health centers, hospitals, and four private medium clinics provide DOTS services [9].

A facility-based retrospective study was conducted from May 1 to 30, 2016. Data on TB patients registered from May 2012 to June 2015 were collected from the unit’s TB registry.

Four data collectors with diplomas in nursing and one supervisor with a BSc in public health and with experience in TB studies were recruited.

A data collection template was prepared in English by reviewing the TB registry.

Data quality was assured by employing a pre-test for 5% of questionnaires of the calculated sample size in the same facilities and samples were not included in the study. The data collectors and supervisor were trained intensively for two days on data completion using the prepared data collection template. To improve data quality, data collectors were closely supervised, data was checked to ascertain completeness and consistency, and on site corrections were made with close guidance of the principal investigator.

Data were coded and entered into Epi-Info version 3.5.4 to check for inconsistencies before being exported to IBM SPSS version 20 for cleaning and analysis. Logistic regression was employed for data analysis. Bivariate analysis was employed to examine the association between each exposure and outcome variables. To control the effect of confounding factors or to get independently associated variables, each of the variables that was statistically significant at a P-value <0.25 in bivariate analysis was entered into a backward stepwise multiple logistic regression model at 95% CIs as an independent variable and TB treatment success rate. P-values less than 0.05 were considered statistically significant in both crude and adjusted odds ratio (aOR). Predictor variables of treatment success were reported with aOR and 95% CIs (aOR, 95% CI).

Ethical clearance was obtained from the Ethical Review committee of the College of Health Science and Medicine, Wolaita Sodo University. 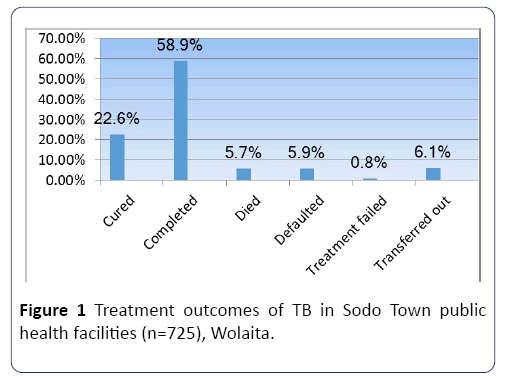 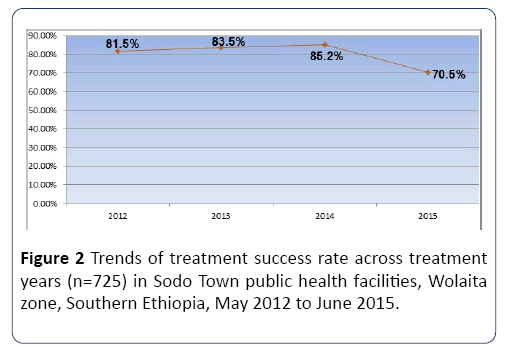 Here we reveal an average TSR of 81.5%. Forms of TB, year of treatment, CPT initiation for HIV co-infected TB patients, and sputum smear conversion at the 2nd month were identified as independent predictors of TSR. This study revealed that 40.3% of patients had pulmonary-positive TB, higher than the study finding from Dabat, northwest Ethiopia (29.4%) [10].

TB/HIV co-infection was present in 9.9% of patients, lower than many previous studies [11-16]. This may be due to improvements in community awareness, implementation of multi-sectorial HIV/AIDS prevention activities and geographic, socioeconomic and cultural variability between the study areas. The co-infection rate showed a steady increase throughout three successive years from 2012-2014 (8.8%, 8.9% and 13.4%, respectively) and declined to 7.1% in 2015. It was higher in SSNPT (19.6%) compared to SSPTB (4.5%) and EPTB (6.9%) patients, consistent with a study report from the Gedio zone [15].

The TSR varied across institutions (74.1% to 91.9%), with a total cure and completion rate of 22.6% and 58.9% respectively. The overall TSR reported here was relatively lower than that reported in the Kola Diba Health Center in northwest Ethiopia (85.5%) [17], Woldiya and Dessie Town health institutions (88.1%) [13], and in Dabat (86.7%) [10], which may be due to the geographic variability between the study areas and inclusion of transferred out patients in our study.

An average default rate reported here (5.9%) was higher than a report from Enfraz Health Center in northwest Ethiopia (0.5%) [22] but lower than in Benishangul Gumuz region (8.61%) [23]. This may be due to geographic variability in the study settings, the study period difference, and mechanisms of defaulter tracing. In contrast to the findings of Dessie and Woldia Town health institutions and findings from northwest Ethiopia [13,17], our defaulter rates showed a steady increase across treatment years from 1% in 2012 to 1.9% in 2015.

The treatment failure rate in the current study was 0.8% and steadily increased throughout the study period except for 2013. This was greater than that reported by the Federal Ministry of Health and Debre Markos referral hospital, respectively [24,25].

Sodo Health Center transferred a relatively high number of TB patients (3.4%) to other DOTS centers, followed by Wadu Health Center (1.4%). In contrast to previous studies [14,19,32], fewer TB patients were transferred out from Wolaita Sodo teaching and referral hospital, probably due to not enrolling TB patients who did not intend to complete treatment in the hospital, even though the hospital is the major diagnostic site of the health facilities in this study. Regarding place of residence, 81% from urban areas and 82.4% from rural areas were successfully treated [33].

This research showed that HIV-infected TB patients were more prone to poor treatment outcomes than non-infected patients, in line with a study in Dessie and Woldia Town [13]. Death, defaulter, treatment failure and transfer out rates of HIV-positive TB patients were 15.3%, 8.3%, 1.4% and 6.9%, with death and defaulter rates higher than previous studies conducted in Ethiopia [34]. This may be due to concomitant administration of anti-tuberculosis and antiretroviral drugs, which can lead to default from pill burden, poor patient compliance, and missing pills due to fear of side-effects. All of these factors can lead to treatment failure, drug interactions, overlapping toxic effects, immune reconstitution syndrome and, ultimately, death.

The odds of TSR varied between treatment years in this study. This is in agreement with a report from Addis Ababa, western Ethiopia, Gedio zone of SNNPR, and Metema Hospital of northwest Ethiopia [11,15,26,33]. TB patients treated in 2012 had 4.43-times greater odds of a favorable treatment compared to in 2015, while those treated in 2014 had a 4.11- times greater chance of succeeding treatment than in 2015. This may be due to seasonal attention to TB case management and trained health worker turnover at the facilities.

Pulmonary-negative TB patients had a 4.72-times greater chance of succeeding treatment than extra-pulmonary TB patients, in contrast to previously published finding in the southern region [37], northwest Ethiopia [24] and at Gondar University [28].

HIV-positive TB patients who started CPT were 4.8-times more likely to succeed treatment than their counterparts. Our result supports the hypothesis that CPT initiation prolongs survival by decreasing the incidence of opportunistic infections in all HIV-infected patients [8], hence improving treatment outcomes in TB/HIV co-infected cases [37].

Sputum smear-positive TB patients at DOTS initiation with negative sputum smear results at the end of the second month had a 31.73-times greater chance of succeeding treatment than those who were smear-positive after two months of full intensive phase therapy. This agrees with findings from the southern region of Ethiopia, in which a positive smear at the 2nd month of follow-up was an independent risk factor for poor treatment outcomes. These reports support the notion that any TB patient with a positive smear result at the end of the intensive phase are at risk of poor treatment outcomes and developing MDR-TB, which is a serious public health issue that needs to be addressed [1].

Limitations of the study

The major limitation of this study was that the full range of socio-demographic and clinical variables were not available.

The overall TSR was low, below the WHO TSR target and less than the national TB success rate reported by the WHO in 2015. Health centers exhibited better TSRs than hospitals in the study area. The proportion of deaths was higher in SNPTB than SPPTB and EPTB, while defaulter and treatment failure rates were higher in EPTB and SPPTB than the other forms of TB, respectively. Types of TB, year of treatment, sputum smear conversion by the 2nd month and CPT initiation for HIVpositive TB patients were predictors of TSR.

1. Continuous and close follow-up of TB patients during the course of treatment is recommended.

2. Facilities should follow the overall condition of transferred-out TB patients to other facilities, possibly introducing mechanisms to report their respective treatment outcomes.

4. We also recommend further studies that include private TB managing institutions, which use a longitudinal design to develop full knowledge and to identify common reasons for unsuccessful treatment outcomes in TB patients.